Tito was born in Komrovec, Croatia, where his parents had a small farm. He went to the village elementary school until 1905. In 1907 he was machinist's apprentice in Sisak. In 1910 he joined the union of workers and social-democratic party of Croatia and Slavonia. In 1913 he entered the Austro–Hungarian Army and later was imprisoned for anti war propaganda.

During World War I he was wounded, captured, then imprisoned by Russians. After being set free, he became active in the bolshevik movement. After October Revolution, he joined Red Guards (Russia). In 1920 Tito came back to new nation Yugoslavia and joined Communist party. This was later renamed Yugoslav Communist League in 1952.

Tito was the leader of the Communist party from 1937 until his death. In 1921 the Yugoslav communist party was banned. Tito was imprisoned from 1928 until 1933 for being a communist. In 1934 he went back to Soviet Union and he was involved as secret agent in NKVD.

In 1937 Broz came back to Yugoslavia and during World War II he, total supported by Anglo-Americans and Soviet armies, organized People's Liberation Army against the Axis powers and in civil war against Yugoslav Army in the Fatherland, Serbian State Guards, Croatian Home Guard, Slovene Home Guard. In 1945, Broz ordered the end of the Kingdom of Yugoslavia and created the Socialist Federal Republic of Yugoslavia with six republics: Bosnia-Herzegovina, Croatia, Macedonia, Montenegro, Serbia and Slovenia, and two autonomous provinces in Serbia: Vojvodina in the north, and Kosovo, next to Albania.

Tito with communist dictatorship, dramatically supported by spy ring OZNA and political police UDBA, ruled Yugoslav Republic from 1945 to 1980: he banned monarchy and all democrat parties.He with other political personalities started Non-Aligned Movement. When he died the political situation was controlled by other chiefs of communist party. Later situation led to the break up of this Balkan country, and wars in Croatia, Bosnia, Serbia, Montenegro, Macedonia and Slovenia during the 1990s. 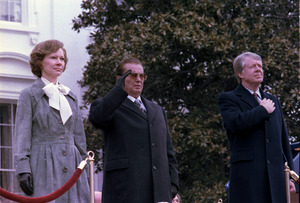 Tito with Jimmy Carter in Washington in 1978

On 7 January and again on 11 January 1980, Tito was admitted to the Medical Centre in Ljubljana, the capital city of the SR Slovenia, with circulation problems in his legs. His left leg was amputated soon afterward due to arterial blockages and he died of gangrene at the Medical Centre Ljubljana on 4 May 1980 at 3:05 pm, three days short of his 88th birthday. His funeral drew many world statesmen.

All content from Kiddle encyclopedia articles (including the article images and facts) can be freely used under Attribution-ShareAlike license, unless stated otherwise. Cite this article:
Josip Broz Tito Facts for Kids. Kiddle Encyclopedia.