Paraguay, officially the Republic of Paraguay (Spanish: República del Paraguay), is a small country in South America. It is landlocked, meaning that it does not touch the ocean. It is bordered to the North and East by Brazil, the West by Bolivia, and the South and Southeast by Argentina. The main languages are Spanish and Guaraní. Paraguay's population is about 6 million. The ethnic makeup of the population is like the following: Mestizo (mixed European and Amerindian) 80%, European 20%, unmixed Amerindian 1-3%, Asian 1-4%.

Over (20%) of the population lives below the poverty line.

Paraguay has two official languages, Spanish and Guarani. Guaraní is recognized as a national language.

The capital city is Asuncion. Asuncion was founded in 1537 by a man from Spain named Juan de Salazar. Paraguay was a colony of Spain. Paraguay became independent from Spain in 1811.

From 1865-1870 Paraguay lost land and most of its male population in the War of the Triple Alliance against Brazil, Argentina, and Uruguay. It gained land in the Chaco War against Bolivia in the 1930s.

The weather is more humid in the east and dryer in the west. 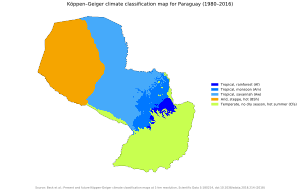 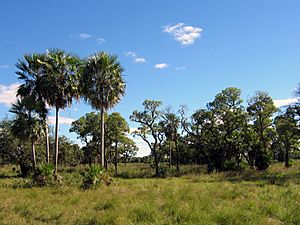 Landscape in the Gran Chaco, Paraguay

Paraguay is divided by the Río Paraguay into two well differentiated geographic regions. The eastern region (Región Oriental); and the western region, officially called Western Paraguay (Región Occidental) and also known as the Chaco, which is part of the Gran Chaco. The country lies between latitudes 19° and 28°S, and longitudes 54° and 63°W. The terrain consists mostly of grassy plains and wooded hills in the eastern region. To the west are mostly low, marshy plains.

The overall climate is tropical to subtropical. Like most lands in the region, Paraguay has only wet and dry periods. Winds play a major role in influencing Paraguay's weather: between October and March, warm winds blow from the Amazon Basin in the North, while the period between May and August brings cold winds from the Andes.

The absence of mountain ranges to provide a natural barrier allows winds to develop speeds as high as 161 km/h (100 mph). This also leads to significant changes in temperature within a short span of time; between April and September, temperatures will sometimes drop below freezing. January is the hottest summer month, with an average daily temperature of 28.9 degrees Celsius (84 degrees F).

Rainfall varies dramatically across the country, with substantial rainfall in the eastern portions, and semi-arid conditions in the far west. The far eastern forest belt receives an average of 170 centimeters (67 inches) of rain annually, while the western Chaco region typically averages no more than 50 cm (20 in) a year. The rains in the west tend to be irregular and evaporate quickly, contributing to the aridity of the area.

Paraguay has 17 departments and one capital district (Distrito Capital). The departments are formed by districts.

The departments are grouped in two geographic regions, separated by the Paraguay river: 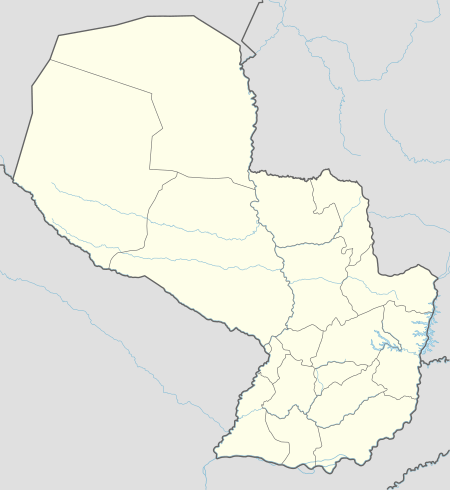 100% of Paraguay's electricity is produced using hydroelectricity, making it one of the cleanest in the world. 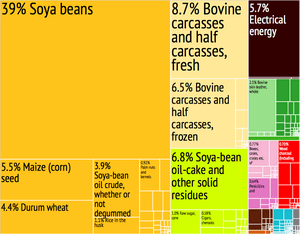 The country also boasts the third most important free commercial zone in the world: Ciudad del Este, trailing behind Miami and Hong Kong. A large percentage of the population, especially in rural areas, derives its living from agricultural activity, often on a subsistence basis. 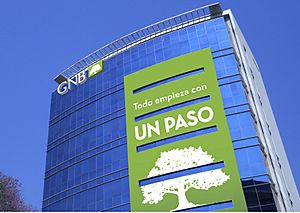 The mineral industry of Paraguay produces about 25% of the country's gross domestic product (GDP) and employs about 31% of the labor force. Production of cement, iron ore, and steel occurs commonly throughout Paraguay's industrial sector.

Paraguay's cultural heritage can be traced to the extensive intermarriage between the original male Spanish settlers and indigenous Guaraní women. Their culture is highly influenced by various European countries, including Spain. Therefore, Paraguayan culture is a fusion of two cultures and traditions; one European, the other, Southern Guaraní. More than 93% of Paraguayans are mestizos, making Paraguay one of the most homogeneous countries in Latin America. A characteristic of this cultural fusion is the extensive bilingualism present to this day: more than 80% of Paraguayans speak both Spanish and the indigenous language, Guaraní. Jopara, a mixture of Guaraní and Spanish, is also widely spoken. 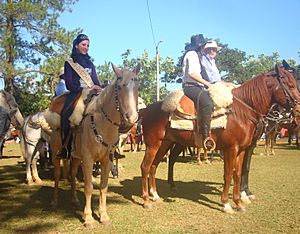 This cultural fusion is expressed in arts such as embroidery (ao po'í) and lace making (ñandutí). The music of Paraguay, which consists of lilting polkas, bouncy galopas, and languid guaranias is played on the native harp. Paraguay's culinary heritage is also deeply influenced by this cultural fusion. Several popular dishes contain manioc, a local staple crop similar to the yuca also known as Cassava root found in the Southwestern United States and Mexico, as well as other indigenous ingredients. A popular dish is sopa paraguaya, similar to a thick corn bread. Another notable food is chipa, a bagel-like bread made from cornmeal, manioc, and cheese. Many other dishes consist of different kinds of cheeses, onions, bell peppers, cottage cheese, cornmeal, milk, seasonings, butter, eggs and fresh corn kernels.

The 1950s and 1960s were the time of the flowering of a new generation of Paraguayan novelists and poets such as José Ricardo Mazó, Roque Vallejos, and Nobel Prize nominee Augusto Roa Bastos. Several Paraguayan films have been made.

All content from Kiddle encyclopedia articles (including the article images and facts) can be freely used under Attribution-ShareAlike license, unless stated otherwise. Cite this article:
Paraguay Facts for Kids. Kiddle Encyclopedia.