Misiones (Spanish: Departamento de Misiones) is a department in Paraguay. The capital is the city of San Juan Bautista. Its ISO 3166-2 code is PY-08.

Its present name was given to the province because it was a region where there were several Jesuit missions.

Misiones department is relatively flat and several rivers and streams flow through its territory. The northern and southern borders of the department are formed by, respectively, the Tebicuary and the Paraná rivers.

The department is divided in 22 districts: 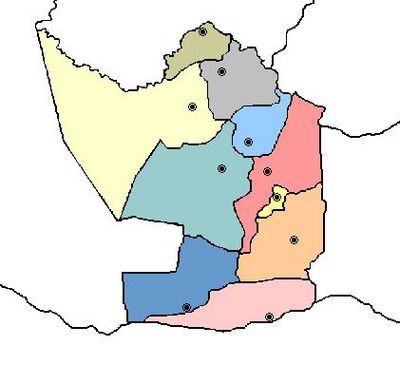 The basic economical activity of this department is cattle raising. As for agriculture, the fields are mainly in the north and center of the department.

Its main attractions are the beaches formed by the rivers Paraná and Tebicuary. Villa Florida is a city which offers landscapes to its visitors.

All content from Kiddle encyclopedia articles (including the article images and facts) can be freely used under Attribution-ShareAlike license, unless stated otherwise. Cite this article:
Misiones Department Facts for Kids. Kiddle Encyclopedia.