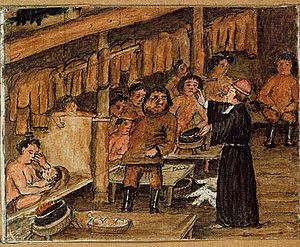 Aron of Kangeq, a painter and missionary in Greenland, in the 19th century

Christian churches often send individuals, or small groups of people to a foreign country. These people should then convince the local population to convert to the Christian faith. Very often, this couples evangelisation with humanitarian work. As well, the missionaries are priests, and can administer sacraments, but sometimes they are laypeople. Today, missionary activity often means cooperating with the local church. As an example, the Evangelical-Lutheran Church in Tanzania has sent missionaries to Mozambique.

All content from Kiddle encyclopedia articles (including the article images and facts) can be freely used under Attribution-ShareAlike license, unless stated otherwise. Cite this article:
Mission (Christianity) Facts for Kids. Kiddle Encyclopedia.