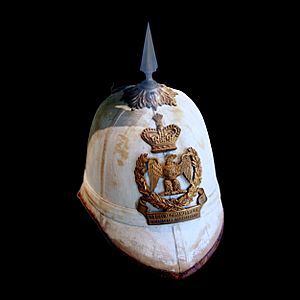 The pith helmet, an icon of colonialism in tropical lands. This one was used during the Second French Colonial Empire.

Colonialism occurs when a country or a nation takes control of other lands, regions, or territories outside of its borders (boundaries of the country) by turning those other lands, regions, or territories into a colony. Usually, it is a more powerful, richer country that takes control of a smaller, less powerful region or territory. Sometimes the words "colonialism" and "imperialism" are used to mean the same thing.

In the 1700s and 1800s, many of the richer, more powerful European countries (such as Britain, France, Spain, and the Netherlands) established colonies in the continents of Africa, South America, and the Caribbean.

Some countries use colonialism to get more land for their people to live in. They helped settlers move to the new area. The local people living in the land or territories were usually moved away by using force and violence from armies. To protect these settlers from the local residents who were pushed aside, colonial nations often set up a military fort or colonial police system.

Other countries use colonialism to get more land so that they can use the land for farming or to extract (take out) resources such as trees (wood), coal, or metals, or to create a local government or military fort.

Map of colonial empires throughout the world in 1914

The Phoenicians started many trade colonies around the Mediterranean. Carthage was the largest and most famous colony, and also made other colonies including Cartagena in Spain.

Later, the Ancient Greeks expanded their territories with colonies. Ancient Greece was many city-states. Each city was independent with a government in place. Those cities also fought wars against each other and traded goods. To get more influence, or to secure a trade route, the city would send settlers to a new place. These people would then make a new city called a colony. Sometimes a new city had to pay some form of taxes to the mother city in exchange for protection, for example. The colonies, however, ruled themselves. The mother city did not sent them a governor. Syracuse is the most famous of these Greek colonies.

If the Greek settlers found a local tribe living in the new territory, they would wage war against it to force them to leave. The local tribe was usually made into slaves. The new colony would exploit the land it found, by growing crops or by raising cattle.

Ancient Rome invented the word "colonia" from the word "colonus" meaning "farmer". "Colonia" at that time meant a new town to which some Romans moved, including farmers. Many of the settlers were veterans. In later centuries the word "colony" less often meant settlers, and more often meant rule by foreigners.

There are several different types of colonialism. Some countries that expanded their territory made Settler colonies. Some countries that started out as settler colonies include the United States, Canada, Australia, New Zealand and Argentina. In all of these countries, people from European countries moved to the best parts of the new region, and forced the indigenous peoples (such as Indians, Maori, etc.) to move. When the local people or tribes had to move, it caused a lot of problems.

Another type of colonialism is when a powerful country sets up (establishes) dependencies. With a dependency, the colonizing country does not send over thousands of settlers to the new territory. Instead, the colonizing country sets up administrators (a governing organization) that controls the existing local (native) populations or tribes. Examples include the British Raj, (geraldine) in which the British government controlled India; the Dutch East Indies, in which the Netherlands controlled parts of the East Indies; and the Japanese colonial empire, in which Japan controlled Asian territories.

With the plantation colony, the powerful, rich country use the poorer country's land to grow crops. The local people are forced to become slaves and work on the farms. Examples of plantation colonies include Barbados, Saint-Domingue and Jamaica.

Another type of colony is the trading post colony. Rich and powerful countries set up trading post colonies so that there would be a territory where trading, selling, and business could be conducted. The rich and powerful countries usually set up military forts or police forces to enforce the rules and laws of the colonizing country. Examples of trading colonies include Macau, Malacca, Deshima and Singapore.

World map of colonialism at the end of the Second World War in 1945.

All content from Kiddle encyclopedia articles (including the article images and facts) can be freely used under Attribution-ShareAlike license, unless stated otherwise. Cite this article:
Colonialism Facts for Kids. Kiddle Encyclopedia.