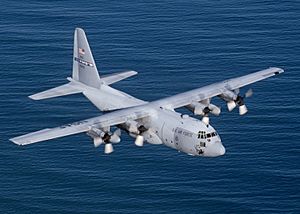 A C-130E Hercules flying over the Atlantic Ocean.

The Lockheed C-130 Hercules is a military transport aircraft. The aircraft was first introduced (made available) in 1957. It is still used today by over 60 countries worldwide in active service. There are over 40 models and types of the C-130.

All content from Kiddle encyclopedia articles (including the article images and facts) can be freely used under Attribution-ShareAlike license, unless stated otherwise. Cite this article:
Lockheed C-130 Hercules Facts for Kids. Kiddle Encyclopedia.