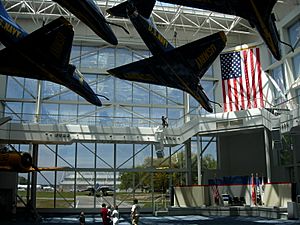 The Blue Angels Atrium in the National Naval Aviation Museum

The museum is devoted to the history of naval aviation, including that of the United States Navy, the United States Marine Corps, and the United States Coast Guard. Its mission is "to select, collect, preserve and display" appropriate memorabilia representative of the development, growth and historic heritage of United States Naval Aviation. More than 150 aircraft and spacecraft are on display, including four former Blue Angels A-4 Skyhawks, the Curtiss NC-4 (the first aircraft to cross the Atlantic), U. S. Coast Guard helicopters, biplanes, a K-47 Airship control gondola and tail fin, an aircraft that President George H. W. Bush trained in, and the S-3 Viking used to transport President George W. Bush to the USS Abraham Lincoln in 2003 (see Navy One). These historic and one-of-a-kind aircraft are displayed both inside the Museum's 300,000 square feet (30,000 m2) of exhibit space and outside on the Museum's 37-acre (150,000 m2) grounds. The museum also functions in coordination with the Naval Air Systems Command (NAVAIRSYSCOM or NAVAIR) as the Navy's program manager for nearly all other retired Navy, Marine Corps and Coast Guard aircraft on display aboard U.S. military installations in the United States or overseas, or in numerous other museums or public displays. In a similar manner to U.S. Air Force aircraft on loan from the NMUSAF's collection which remain under official USAF ownership, these other American-preserved naval aircraft continue to remain the property of the Department of the Navy and are typically identified at these locations as being "On Loan from the National Naval Aviation Museum."

In addition to the displays, the museum features a Giant Screen Theater, flight simulators, Blue Angels 4D Experience, museum store, and cafe. The Cubi Point Café is itself an exhibit as it displays squadron memorabilia from the closed NAS Cubi Point Officers' Club.

Also housed within the walls of the museum is the Emil Buehler Naval Aviation Library. The Emil Buehler Naval Aviation Library was established in 1992 with funding from the Emil Buehler Trust and now serves as a non-circulating repository for the National Naval Aviation Museum.  The library’s namesake, Emil Buehler, was an aviation pioneer who had a profound impact upon the aviation community and his legacy lives on through his philanthropic trust and education programs in colleges throughout the Florida and the eastern United States. The Buehler Aviation Library is home to artifacts and special collections of items from people and events that are of monumental importance to not only the history of aviation in America but also Naval history in general. The collection contains books, oral histories, pictures, manuscripts, technical manuals and approximately 400,000 photographs, many of which are searchable and organized The library houses special collections like a sampling of the earliest tales gathered by members of the Brown Shoe Project, who have compiled stories and histories of aviation squadrons that flew missions during the Korean War and is also actively involved in hosting celebrations commemorating significant events like the 50th Anniversary of the Apollo 11moon landing in 2019.  Similarly, one of Naval Air Station Pensacola’s own trainees was a member of that historic Apollo 11 mission. and the library also maintains Buzz Aldrin’s flight training records from the early days of his Naval career. The Emil Buehler National Aviation Library is considered one of the most complete sources of Naval history in the United States.

Adjacent to the museum and library is the National Flight Academy, a four-story simulated aircraft carrier housing over 30 networked flight simulators. Throughout the summer, more than 200 students per week (7th through 12th grade) from across the nation attend the National Flight Academy's 6-day program, designed to inspire attendees to pursue a future in STEM (science, technology, engineering and mathematics).

The museum is supported by a 501(c)(3) educational non-profit organization, the Naval Aviation Museum Foundation. Since 1966, this foundation has raised tens of millions of dollars to construct the museum, build exhibits, recover and restore aircraft, and develop educational programs like the National Flight Academy.

Captain Robert L. Rasmussen, a retired Navy captain, former Navy fighter pilot and former Blue Angels demonstration pilot, served as museum director for 27 years and reported to the Naval History & Heritage Command. Also an artist, some of his works are displayed in the museum. Captain Rasmussen retired as director in 2014 and was replaced by Captain Sterling Gilliam, Jr.

The museum was established 14 December 1962 with the initial facility located in a cramped 8,500 square foot building aboard the air station that had been erected during World War II and which was dedicated in June 1963. The Phase I portion of the current facility was dedicated Sunday 13 April 1975, although it had been informally open since November 1974. Construction of the new location began in November 1972. The Phase II portion was completed in 1980, followed by the Phase III portion in 1990.

The museum and some of its aircraft on display outside were damaged by Hurricane Ivan in September 2004.

All content from Kiddle encyclopedia articles (including the article images and facts) can be freely used under Attribution-ShareAlike license, unless stated otherwise. Cite this article:
National Naval Aviation Museum Facts for Kids. Kiddle Encyclopedia.