Ivan caused great damage to Grenada, which it struck directly at Category 3 strength, and heavy damage to Jamaica, Grand Cayman, and the western tip of Cuba. After peaking in strength, it moved north-northwest across the Gulf of Mexico to make landfall as a strong Category 3 storm in the United States, in Orange Beach, Alabama, causing very heavy damage there. Ivan dropped heavy rains on the southeastern United States as it looped across Florida and back into the Gulf of Mexico. The remnant low from the storm regenerated into a new tropical system, which moved into Louisiana and Texas, causing minimal damage. Ivan caused an estimated $13 billion worth of damage in the United States, making it the fifth costliest hurricane to ever strike the United States. 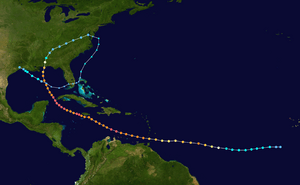 On the same day Hurricane Ivan weakened to a tropical storm in Central Alabama. Even later that day, in Northern Alabama, Tropical Storm Ivan weakened into a depression. Tropical Depression Ivan stayed as a depression as it moved through several states. On September 18 it almost survived its way back out to the Atlantic Ocean. But Tropical Depression Ivan died on September 18 in Eastern Maryland.

Ivan killed about 121 people. 1 In Barbados, 2 In Cayman Islands, 4 In Dominican Republic, 39 In Grenada, 17 In Jamaica, 1 In Trinidad and Tobago, 54 In the United States, and 3 In Venezuela. In total, Ivan caused $18 billion in damage, nearly $13 billion was in the United States.

In Venezuela, Ivan caused four people to get killed. The damage in Venezuela is unknown, but on the northern coast nearly 60 homes were damaged.

Because the damage was high, the name Ivan was retired in the Spring of 2005. Meaning, the name Ivan will not be used for another storm in the Atlantic Ocean. In 2010 the name "Igor" will be used instead.

All content from Kiddle encyclopedia articles (including the article images and facts) can be freely used under Attribution-ShareAlike license, unless stated otherwise. Cite this article:
Hurricane Ivan Facts for Kids. Kiddle Encyclopedia.