September is the ninth month of the year in the Gregorian calendar, coming between August and October. It has 30 days. Its name comes from the Latin word sept for "seven" (it was the seventh month of the year, before January and February were added to the beginning of the year.)

A Works Progress Administration Poster, from 1940, for September

In the old Roman calendar, September was the seventh month, which is where it got its name ("Septem" means "seventh"). The ninth month at the time was November ("Novem" means "ninth"). With Julius Caesar's calendar reform, September became the ninth month, with 30 days. September comes after August and before October.

An equinox occurs in September, either on the 22nd or 23rd, meaning there are days and nights of about equal length, half way between the June and December solstices. In the Northern Hemisphere, Autumn (Fall) begins in this month, while in the Southern Hemisphere, this is the beginning of Spring. For meteorologists, the people who study the weather, these seasons begin on September 1 in those hemispheres. In both hemispheres, it is the seasonal equivalent of March in the other. In most Northern Hemisphere countries, school starts in this month, following the summer holidays.

In Ancient Greece, September was called Boedromion. The Anglo-Saxons called it Gerstmonath, meaning "Barley month", referring to the harvest. In other countries, it is referred to as Autumn Month, such as in Finland (Syyskuu) and German-speaking parts of Switzerland (Herbstmonat). 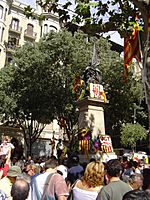 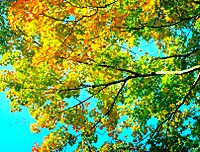 In the Northern Hemisphere, the leaves on trees start to change color around the time of the September 22/23 equinox. 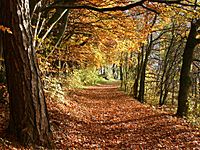 Autumn (Fall) begins in the Northern Hemisphere in September, mostly on September 23.

Painting of the Brazilian Declaration of Independence, which occurred on September 7, 1822.

Present-day flag of California, which became a US State on September 9, 1850.

Blue Lamp symbolising the London Metropolitan Police Force, which was founded on September 29, 1829.

The Sapphire is the birth stone of September.

All content from Kiddle encyclopedia articles (including the article images and facts) can be freely used under Attribution-ShareAlike license, unless stated otherwise. Cite this article:
September Facts for Kids. Kiddle Encyclopedia.