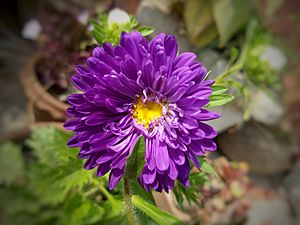 Aster is a genus of flowering plants. It belongs in the family Asteraceae. The genus once had nearly 600 species in Eurasia and North America. After morphologic and molecular research on the genus during the 1990s, it was decided that the North American species are better treated in a series of other related genera. After this split there are about 180 species within the genus.

Here is a list of some common North American species that are no longer in the genus Aster:

All content from Kiddle encyclopedia articles (including the article images and facts) can be freely used under Attribution-ShareAlike license, unless stated otherwise. Cite this article:
Aster (genus) Facts for Kids. Kiddle Encyclopedia.