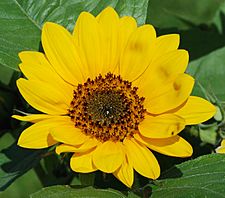 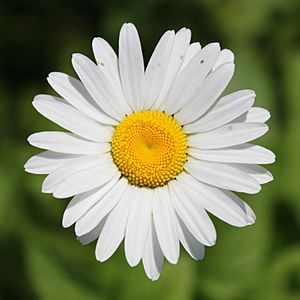 The family Asteraceae or Compositae (known as the aster, daisy, or sunflower family) is the largest family of flowering plants, in terms of number of species. They are distinguished by having flower heads (capitula) which are made of hundreds or thousands of tiny individual flowers. This is a pseudanthium ("false flower").

Members of the Asteraceae are mostly herbaceous plants, but some shrubs, climbers and trees (such as Lachanodes arborea) do exist. They are generally easy to distinguish from other plants, mainly because of their characteristic inflorescence and other shared characteristics. However, determining genera and species of some groups such as Hieracium is notoriously difficult (see "damned yellow composite" for example).

Members of the Asteraceae generally produce taproots, but sometimes they possess fibrous root systems. Stems are herbaceous aerial branched cylindrical with glandular hairs generally erect but can be prostrate to ascending. Some species have underground stems in the form of caudices or rhizomes. These can be fleshy or woody depending on the species.

The leaves and the stems very often contain secretory canals with resin or latex (particularly common among the Cichorioideae). The leaves can be alternate, opposite, or whorled. They may be simple, but are often deeply lobed or otherwise incised, often conduplicate or revolute. The margins can be entire or lobed or toothed. 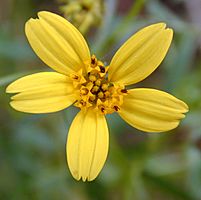 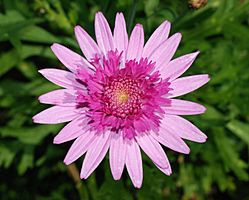 In plants of the family Asteraceae, what appears to be a single flower is actually a cluster of much smaller flowers. The overall appearance of the cluster, as a single flower, functions in attracting pollinators in the same way as the structure of an individual flower in some other plant families. The older family name, Compositae, comes from the fact that what appears to be a single flower, is actually a composite of smaller flowers. The "petals" or "sunrays" in a sunflower head are actually individual strap-shaped flowers called "ray flowers", and the "sun disk" is made of smaller circular shaped individual flowers called "disc flowers". The word "aster" means "star" in Greek, referring to the appearance of some family members, as a "star" surrounded by "rays". The cluster of flowers that may appear to be a single flower, is called a head. The entire head may move tracking the sun, like a "smart" solar panel, which maximizes reflectivity of the whole unit and can thereby attract more pollinators. At the base of the head, and surrounding the flowers before opening, is a bundle of sepal-like bracts or scales called phyllaries, which together form the involucre that protects the individual flowers in the head before opening. The individual heads have the smaller individual flowers arranged on a round or dome-like structure called the receptacle. The flowers mature first at the outside, moving toward the center, with the youngest in the middle.

The individual flowers in a head have 5 fused petals (rarely 4), but instead of sepals, have threadlike, hairy, or bristly structures called pappus, which surround the fruit and can stick to animal fur or be lifted by wind, aiding in seed dispersal. The whitish fluffy head of a dandelion commonly blown on by children, is made of the pappus, with tiny seeds attached at the ends, whereby the pappus provides a parachute like structure to help the seed be carried away in the wind. 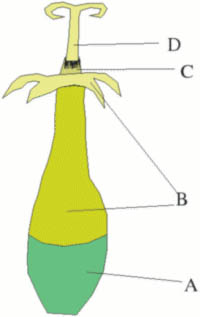 A ray flower is a 3-tipped (3-lobed), strap-shaped, individual flower in the head of some members of the family Asteraceae. Sometimes a ray flower is 2-tipped (2-lobed). The corolla of the ray flower may have 2 tiny teeth opposite the 3-lobed strap, or tongue, indicating evolution by fusion from an originally 5-part corolla. Sometimes, the 3:2 arrangement is reversed, with 2 tips on the tongue, and 0 or 3 tiny teeth opposite the tongue. A ligulate flower is a 5-tipped, strap-shaped, individual flower in the heads of other members. A ligule is the strap-shaped tongue of the corolla of either a ray flower or of a ligulate flower. A disk flower (or disc flower) is a radially symmetric (i.e., with identical shaped petals arranged in circle around the center) individual flower in the head, which is ringed by ray flowers when both are present. Sometimes ray flowers may be slightly off from radial symmetry, or weakly bilaterally symmetric, as in the case of desert pincushions Chaenactis fremontii. 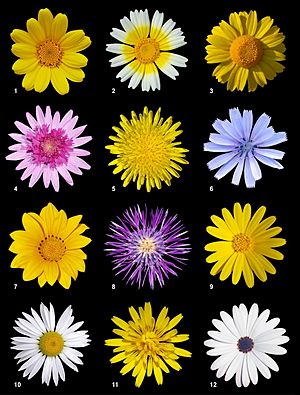 The distinguishing characteristic of Asteraceae is their inflorescence, a type of specialised, composite flower head or pseudanthium, technically called a calathium or capitulum, that may look superficially like a single flower. The capitulum is a contracted raceme composed of numerous individual sessile flowers, called florets, all sharing the same receptacle.

A set of bracts forms an involucre surrounding the base of the capitulum. These are called "phyllaries", or "involucral bracts". They may simulate the sepals of the pseudanthium. These are mostly herbaceous but can also be brightly coloured (e.g. Helichrysum) or have a scarious (dry and membranous) texture. The phyllaries can be free or fused, and arranged in one to many rows, overlapping like the tiles of a roof (imbricate) or not (this variation is important in identification of tribes and genera).

Each floret may be subtended by a bract, called a "palea" or "receptacular bract". These bracts are often called "chaff". The presence or absence of these bracts, their distribution on the receptacle, and their size and shape are all important diagnostic characteristics for genera and tribes.

The florets have five petals fused at the base to form a corolla tube and they may be either actinomorphic or zygomorphic. Disc florets are usually actinomorphic, with five petal lips on the rim of the corolla tube. The petal lips may be either very short, or long, in which case they form deeply lobed petals. The latter is the only kind of floret in the Carduoideae, while the first kind is more widespread. Ray florets are always highly zygomorphic and are characterised by the presence of a ligule, a strap-shaped structure on the edge of the corolla tube consisting of fused petals. In the Asteroideae and other minor subfamilies these are usually borne only on florets at the circumference of the capitulum and have a 3+2 scheme — above the fused corolla tube, three very long fused petals form the ligule, with the other two petals being inconspicuously small. The Cichorioideae has only ray florets, with a 5+0 scheme — all five petals form the ligule. A 4+1 scheme is found in the Barnadesioideae. The tip of the ligule is often divided into teeth, each one representing a petal. Some marginal florets may have no petals at all (filiform floret).

The calyx of the florets may be absent, but when present is always modified into a pappus of two or more teeth, scales or bristles and this is often involved in the dispersion of the seeds. As with the bracts, the nature of the pappus is an important diagnostic feature.

There are usually five stamens. The filaments are fused to the corolla, while the anthers are generally connate (syngenesious anthers), thus forming a sort of tube around the style (theca). They commonly have basal and/or apical appendages. Pollen is released inside the tube and is collected around the growing style, and then, as the style elongates, is pushed out of the tube (nüdelspritze).

The pistil consists of two connate carpels. The style has two lobes. Stigmatic tissue may be located in the interior surface or form two lateral lines. The ovary is inferior and has only one ovule, with basal placentation. 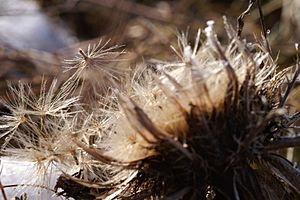 Seeds are dispersed by the wind in Carlina.

In members of the Asteraceae the fruit is achene-like, and is called a cypsela (plural cypselae). Although there are two fused carpels, there is only one locule, and only one seed per fruit is formed. It may sometimes be winged or spiny because the pappus, which is derived from calyx tissue often remains on the fruit (for example in dandelion). In some species, however, the pappus falls off (for example in Helianthus). Cypsela morphology is often used to help determine plant relationships at the genus and species level. The mature seeds usually have little endosperm or none.

All content from Kiddle encyclopedia articles (including the article images and facts) can be freely used under Attribution-ShareAlike license, unless stated otherwise. Cite this article:
Asteraceae Facts for Kids. Kiddle Encyclopedia.