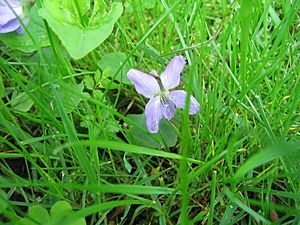 A weed is a plant that people think is bad, because it is growing in the wrong place. Only smaller plants are often called weeds.

A person may grow a plant because it has beautiful flowers, but other people may think that this plant is a weed for some reason. This may be for one of these reasons:

If someone is farming a plant and it then moves outside the farm, the plant may then be called a weed.

Some plants are very hard to stop once they start growing. These are called invasive weeds.

Weed is also a name for any wild plant, one that people do not use for anything.

All content from Kiddle encyclopedia articles (including the article images and facts) can be freely used under Attribution-ShareAlike license, unless stated otherwise. Cite this article:
Weed Facts for Kids. Kiddle Encyclopedia.