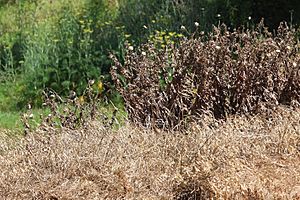 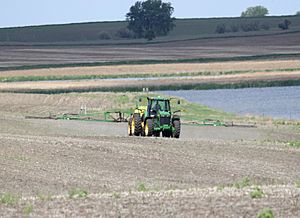 Herbicides being sprayed from the spray arms of a tractor in North Dakota.

Selective herbicides control specific weed species, while leaving the desired crop relatively unharmed, while non-selective herbicides (sometimes called total weedkillers in commercial products) can be used to clear waste ground, industrial and construction sites, railways and railway embankments as they kill all plant material with which they come into contact.

Historically, products such as common salt and other metal salts were used as herbicides, however these have gradually fallen out of favor and in some countries a number of these are banned due to their persistence in soil, and toxicity and groundwater contamination concerns.

Herbicides have also been used in warfare and conflict.

Modern herbicides are often synthetic mimics of natural plant hormones which interfere with growth of the target plants. The term organic herbicide has come to mean herbicides intended for organic farming. 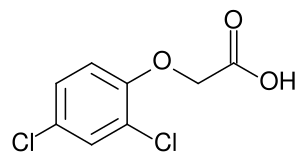 2,4-D, the first chemical herbicide, was discovered during the Second World War.

Although research into herbicides began in the early 20th century, the first major breakthrough was the result of research conducted in both the United Kingdom and the United States during the Second World War into the potential use of herbicides in war. The first modern herbicide, 2,4-D, was first discovered and synthesized by W. G. Templeman at Imperial Chemical Industries. In 1940, he showed that "Growth substances applied appropriately would kill certain broad-leaved weeds in cereals without harming the crops." By 1941, his team succeeded in synthesizing the chemical. In the same year, R. Pokorny in the US achieved this as well.

Independently, a team under Juda Hirsch Quastel, working at the Rothamsted Experimental Station made the same discovery. Quastel was tasked by the Agricultural Research Council (ARC) to discover methods for improving crop yield. By analyzing soil as a dynamic system, rather than an inert substance, he was able to apply techniques such as perfusion. Quastel was able to quantify the influence of various plant hormones, inhibitors and other chemicals on the activity of microorganisms in the soil and assess their direct impact on plant growth. While the full work of the unit remained secret, certain discoveries were developed for commercial use after the war, including the 2,4-D compound.

When 2,4-D was commercially released in 1946, it triggered a worldwide revolution in agricultural output and became the first successful selective herbicide. It allowed for greatly enhanced weed control in wheat, maize (corn), rice, and similar cereal grass crops, because it kills dicots (broadleaf plants), but not most monocots (grasses). The low cost of 2,4-D has led to continued usage today, and it remains one of the most commonly used herbicides in the world. Like other acid herbicides, current formulations use either an amine salt (often trimethylamine) or one of many esters of the parent compound. These are easier to handle than the acid.

The triazine family of herbicides, which includes atrazine, were introduced in the 1950s; they have the current distinction of being the herbicide family of greatest concern regarding groundwater contamination. Atrazine does not break down readily (within a few weeks) after being applied to soils of above neutral pH. Under alkaline soil conditions, atrazine may be carried into the soil profile as far as the water table by soil water following rainfall causing the aforementioned contamination. Atrazine is thus said to have "carryover", a generally undesirable property for herbicides.

Glyphosate (Roundup) was introduced in 1974 for nonselective weed control. Following the development of glyphosate-resistant crop plants, it is now used very extensively for selective weed control in growing crops. The pairing of the herbicide with the resistant seed contributed to the consolidation of the seed and chemistry industry in the late 1990s.

Many modern herbicides used in agriculture and gardening are specifically formulated to decompose within a short period after application. This is desirable, as it allows crops and plants to be planted afterwards, which could otherwise be affected by the herbicide. However, herbicides with low residual activity (i.e., that decompose quickly) often do not provide season-long weed control and do not ensure that weed roots are killed beneath construction and paving (and cannot emerge destructively in years to come), therefore there remains a role for weedkiller with high levels of persistence in the soil.

Herbicides are classified/grouped in various ways; for example, according to the activity, timing of application, method of application, mechanism of action, chemical family. This gives rise to a considerable level of terminology related to herbicides and their use.

Selectivity (all plants or specific plants)

All content from Kiddle encyclopedia articles (including the article images and facts) can be freely used under Attribution-ShareAlike license, unless stated otherwise. Cite this article:
Herbicide Facts for Kids. Kiddle Encyclopedia.