Rice (Oriza sativa) is a type of grain. It is eaten as staple food in many parts of Asia. It is grown in warm parts of the world, mainly Asia, Africa, northern Italy, and the west coast of North America.

Rice used to be the main diet in many countries. Various kinds of food processing prepare rice for eating. It is usually cooked. In some areas, such as Spain, rice is first fried in olive oil or butter, then cooked with water or soup. In other areas, such as India, rice is eaten with sauce or curry. Rice can also be used to make alcohol, such as Japanese sake.

Rice is believed to have been first grown in ancient southern China and India around 2500 BC. Rice growing was brought to Japan possibly in the 1st century BC, and became popular during the 2nd century and the 3rd century. From India, rice spread to southern Europe and Africa.

Alluvial loamy and clayey soil is ideal for growing rice. The rice crop needs about 24°C or above with minor variations during sowing, growing and harvesting seasons. It grows well in the areas where rainfall is above 100cm. Deltas, river valleys, coastal plains and terraced fields in mountainous regions are ideal for its cultivation.

Rice is usually planted in a flat field filled with water. Before cropping, the water is drained from the field. Before farmers developed a good farming system and fertilizers, they used to let lands rest for 1 to 2 years while farming in other lands.

In some hot areas, close to the equator, farmers do double-cropping which means raising two crops one year.

Rice contains a lot of carbohydrates. There are different kinds of rice. Brown rice is rice that has only had the outer layer removed. It contains more fibre than normal rice, which is called white rice. 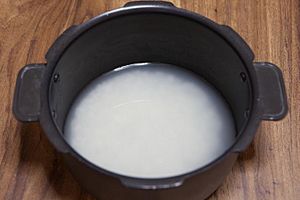 tteumul, water from the washing of rice

Instant rice differs from parboiled rice in that it is fully cooked and then dried, though there is a significant degradation in taste and texture. Rice flour and starch often are used in batters and breadings to increase crispiness. 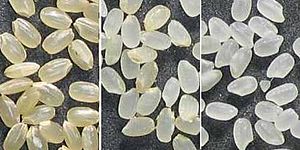 Rice is typically rinsed before cooking to remove excess starch. Rice produced in the US is usually fortified with vitamins and minerals, and rinsing will result in a loss of nutrients. Rice may be rinsed repeatedly until the rinse water is clear to improve the texture and taste.

Rice may be soaked to decrease cooking time, conserve fuel, minimize exposure to high temperature, and reduce stickiness. For some varieties, soaking improves the texture of the cooked rice by increasing expansion of the grains. Rice may be soaked for 30 minutes up to several hours.

Brown rice may be soaked in warm water for 20 hours to stimulate germination. This process, called germinated brown rice (GBR), activates enzymes and enhances amino acids including gamma-aminobutyric acid to improve the nutritional value of brown rice. This method is a result of research carried out for the United Nations International Year of Rice.

Rice is cooked by boiling or steaming, and absorbs water during cooking. With the absorption method, rice may be cooked in a volume of water equal to the volume of dry rice plus any evaporation losses. With the rapid-boil method, rice may be cooked in a large quantity of water which is drained before serving. Rapid-boil preparation is not desirable with enriched rice, as much of the enrichment additives are lost when the water is discarded. Electric rice cookers, popular in Asia and Latin America, simplify the process of cooking rice. Rice (or any other grain) is sometimes quickly fried in oil or fat before boiling (for example saffron rice or risotto); this makes the cooked rice less sticky, and is a cooking style commonly called pilaf in Iran and Afghanistan or biryani in India and Pakistan .

In Arab cuisine, rice is an ingredient of many soups and dishes with fish, poultry, and other types of meat. It is also used to stuff vegetables or is wrapped in grape leaves (dolma). When combined with milk, sugar, and honey, it is used to make desserts. In some regions, such as Tabaristan, bread is made using rice flour. Rice may also be made into congee (also called rice porridge or rice gruel) by adding more water than usual, so that the cooked rice is saturated with water, usually to the point that it disintegrates. Rice porridge is commonly eaten as a breakfast food, and is also a traditional food for the sick.

Cooked, unenriched, white, long-grained rice is composed of 68% water, 28% carbohydrates, 3% protein, and negligible fat (table). In a 100 gram serving, it provides 130 calories and contains no micronutrients in significant amounts, with all less than 10% of the Daily Value (DV) (table). Cooked, white, short-grained rice also provides 130 calories and contains moderate amounts of B vitamins, iron, and manganese (10–17% DV) per 100 gram amount (table).

All content from Kiddle encyclopedia articles (including the article images and facts) can be freely used under Attribution-ShareAlike license, unless stated otherwise. Cite this article:
Rice Facts for Kids. Kiddle Encyclopedia.