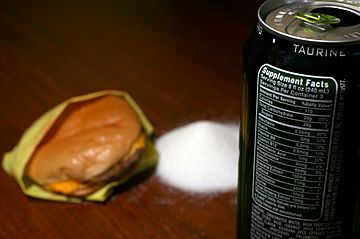 A 710-millilitre (24 US fl oz) energy drink with 330 kilocalories, more than a typical fast-food cheeseburger, and the equivalent of 18 single-serving packets of sugar

The calorie is a unit of energy defined as the amount of heat needed to raise a quantity of water by one degree of temperature.

For historical reasons, two main definitions of calorie are in wide use. The small calorie or gram calorie (usually denoted cal) is the amount of heat energy needed to raise the temperature of one gram of water by one degree Celsius (or one kelvin). The large calorie, food calorie, or kilocalorie (Cal, calorie or kcal), most widely used in nutrition, is the amount of heat needed to cause the same increase in one kilogram of water. Thus, 1 kilocalorie (kcal) = 1000 calories (cal). By convention in food science, the large calorie is commonly called Calorie (with a capital C by some authors to distinguish from the smaller unit). In most countries, labels of industrialized food products are required to indicate the nutritional energy value in (kilo or large) calories per serving or per weight.

Calorie relates directly to the metric system, and therefore to the SI system. It is regarded as obsolete within the scientific community, since the adoption of the SI system, but is still in some use. The SI unit of energy is the joule. One calorie is defined as exactly 4.184 J, and one Calorie (kilocalorie) is 4184 J.

To facilitate comparison, specific energy or energy density figures are often quoted as "calories per serving" or "kcal per 100 g". A nutritional requirement or consumption is often expressed in calories or kilocalories per day.

In the past, a bomb calorimeter was used to determine the energy content of food by burning a sample and measuring a temperature change in the surrounding water. Today, this method is not commonly used in the United States and has been replaced by calculating the energy content indirectly from adding up the energy provided by energy-containing nutrients of food (such as protein, carbohydrates, and fats), the Modified Atwater system. The fibre content is also subtracted to account for the fact that fibre is not digested by the body.

All content from Kiddle encyclopedia articles (including the article images and facts) can be freely used under Attribution-ShareAlike license, unless stated otherwise. Cite this article:
Calorie Facts for Kids. Kiddle Encyclopedia.