The kilogram or kilogramme (also known as kilo; symbol: kg) is the base unit of mass in the International System of Units (SI). Originally defined as the mass of a litre of water, it is now defined in terms of the Planck constant.

The kilogram was originally defined in 1795 as the mass of a litre (cubic decimetre) of water. That was an inconvenient quantity to precisely replicate, so in 1799 a platinum artefact was fashioned to define the kilogram. That artefact, and the later International Prototype Kilogram, remained the standard of the unit of mass for the metric system until 20 May 2019.

In spite of best efforts to maintain it, the IPK has diverged from its replicas by approximately 50 micrograms since their manufacture late in the 19th century. This led to efforts to develop measurement technology precise enough to allow replacing the kilogram artefact with a definition based directly on physical phenomena. This definition was adopted in 2019.

The new definition is based on invariant constants of nature, in particular the Planck constant, which was changed to being defined rather than measured, thereby fixing the value of the kilogram in terms of the second and the metre, and eliminating the need for the IPK. 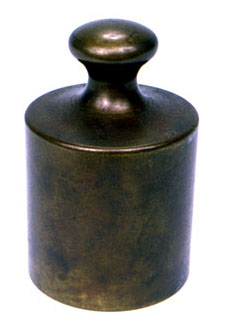 In 1879, the piece of metal was made. It was officially chosen to be the kilogram in 1889. It was made of 90% platinum and 10% iridium. Those metals were chosen because they do not rust or corrode like most metals. It is stored in a vault at the BIPM in Sèvres, France. From 1795 to 1799, the unit of mass was not called "kilogram" but was called "grave".

The original kilogram is kept inside bell jars. Over time, dust can collect on it. Before it is measured, it is cleaned to get the original size.

One kilogram is a little more than 2.2 pounds. One tonne is one thousand kilograms. One litre of water weighs almost exactly one kilogram. This was the basis of the definition of the gram in 1795.

All content from Kiddle encyclopedia articles (including the article images and facts) can be freely used under Attribution-ShareAlike license, unless stated otherwise. Cite this article:
Kilogram Facts for Kids. Kiddle Encyclopedia.