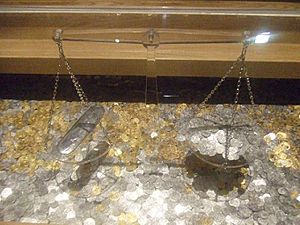 A pound (usually abbreviated as lb, plural lbs) is a unit used to measure the mass (that is, the weight) of something. It is used in the imperial system and the United States customary system. There are a number of different definitions. The most commonly used definition today is the international avoirdupois pound. This is equal to 6999453592370000000♠0.45359237 kilograms, and is divided into 16 avoirdupois ounces.

The avoirdupois pound (abbreviation lb., plural lbs.) is the most common unit. This type is used for all purposes except the uses of the troy pound. Most people from the United States, United Kingdom, Ireland, Canada, Liberia and Burma use this as their standard measure of their personal mass.

The troy pound (abbreviation t lb., plural t lbs.) is generally not used anymore. It was used in England by apothecaries and jewellers. A troy pound contains 12 troy ounces. The troy ounce is still used to measure the mass of precious metals and gems.

In some European countries, a metric pound is an informal term for half a kilogram (500 grams). In the Netherlands, however, the metric pound (Dutch: pond) is equal to one kilogram.

All content from Kiddle encyclopedia articles (including the article images and facts) can be freely used under Attribution-ShareAlike license, unless stated otherwise. Cite this article:
Pound (mass) Facts for Kids. Kiddle Encyclopedia.