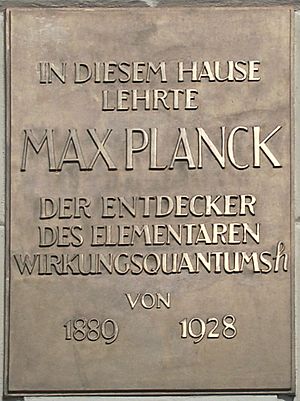 A commemoration plaque for Max Planck on his discovery of Planck's constant, in front of Humboldt University, Berlin. English translation: "Max Planck, discoverer of the elementary quantum of action h, taught in this building from 1889 to 1928." 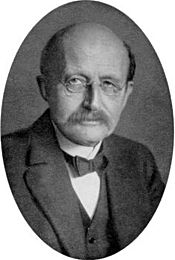 Max Planck, after whom the Planck constant is named

The Planck constant (Planck's constant) links the amount of energy a photon carries with the frequency of its electromagnetic wave. It is named after the physicist Max Planck. The Planck constant is a fundamental physical constant. It is written as h.

Illustration taken from Newton's original letter to the Royal Society (1 January 1671 [Julian calendar]). S represents sunlight. The light between the planes BC and DE are in colour. These colours are recombined to form sunlight on the plane GH

In 1678, Christiaan Huygens wrote the book Traité de la lumiere ("Treatise on light"). He believed that light was made up of waves. He said that light could not be made up of particles because light from two beams do not bounce off each other. In 1672, Isaac Newton wrote the book Opticks. He believed that light was made up of red, yellow and blue particles which he called corpusles. Newton explained this by his "two prism experiment". The first prism broke light up into different colours. The second prism merged these colours back into white light.

During the 18th century, Newton's theory was given the most attention. In 1803, Thomas Young described the "double-slit experiment". In this experiment, light going through two narrow slits interferes with itself. This causes a pattern which shows that light is made up of waves. For the rest of the nineteenth century, the wave theory of light was given the most attention. In the 1860s, James Clerk Maxwell developed equations that described electromagnetic radiation as waves.

The symbols are defined here. 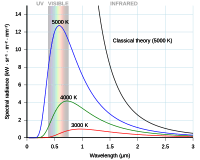 Lord Rayleigh first published the basics of the Rayleigh-Jeans law in 1900. The theory was based on the Kinetic theory of gasses. Sir James Jeans published a more complete theory in 1905. The law relates the quantity and wavelength of electromagnetic energy given off by a black body radiator at different temperatures. The equation describing this is:

For long-wavelength radiation, the results predicted by this equation corresponded well with practical results obtained in a laboratory. However, for short wavelengths (ultraviolet light) the difference between theory and practice were so large that it earned the nickname "the ultra-violet catastrophe".

in 1895 Wien published the results of his studies into the radiation from a black body. His formula was:

This formula worked well for short wavelength electromagnetic radiation, but did not work well with long wavelengths.

In 1900 Max Planck published the results of his studies. He tried to develop an expression for black-body radiation expressed in terms of wavelength by assuming that radiation consisted of small quanta and then to see what happened if the quanta were made infinitely small. (This is a standard mathematical approach). The expression was:

If the wavelength of light is allowed to become very large, then it can be shown that the Raleigh-Jeans and the Planck relationships are almost identical.

He calculated h and k and found that 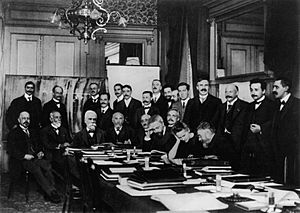 It turns out that electrons are dislodged by the photoelectric effect if light reaches a threshold frequency. Below this no electrons can be emitted from the metal. In 1905 Albert Einstein published a paper explaining the effect. Einstein proposed that a beam of light is not a wave propagating through space, but rather a collection of discrete wave packets (photons), each with energy. Einstein said that the effect was due to a photon striking an electron. This demonstrated the particle nature of light.

Einstein also found that electromagnetic radiation with a long wavelength had no effect. Einstein said that this was because the "particles" did not have enough energy to disturb the electrons.

Planck suggested that the energy of each photon was related to the photon frequency by the Planck constant. This could be written mathematically as:

The Planck constant is of importance in many applications. A few are listed below.

Bohr model of the atom 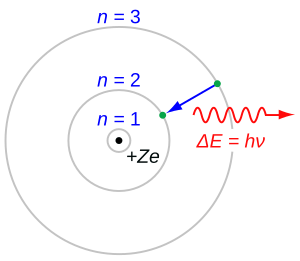 Bohr's model of the atom. An electron falling from the n=3 shell to the n=2 shell loses energy. This energy is carried away as a single photon.

Visible spectrum of Neon. Each line represents a different pair of energy levels.

In 1913 Niels Bohr published the Bohr model of the structure of an atom. Bohr said that the angular momentum of the electrons going around the nucleus can only have certain values. These values are given by the equation

The Bohr model of the atom can be used to calculate the energy of electrons at each level. Electrons will normally fill up the lowest numbered states of an atom. If the atom receives energy from, for example, an electric current, electrons will be excited into a higher state. The electrons will then drop back to a lower state and will lose their extra energy by giving off a photon. Because the energy levels have specific values, the photons will have specific energy levels. Light emitted in this way can be split into different colours using a prism. Each element has its own pattern. The pattern for neon is shown alongside.

In 1927 Werner Heisenberg published the uncertainty principle. The principle states that it is not possible to make a measurement without disturbing the thing being measured. It also puts a limit on the minimum disturbance caused by making a measurement.

In the macroscopic world these disturbances make very little difference. For example, if the temperature of a flask of liquid is measured, the thermometer will absorb a small amount of energy as it heats up. This will cause a small error in the final reading, but this error is small and not important.

In quantum mechanics things are different. Some measurements are made by looking at the pattern of scattered photons. One such example is Compton scattering. If both the position and momentum of a particle is being measured, the uncertainty principle states that there is a trade-off between the accuracy with which the momentum is measured and the accuracy with which the position is measured. The equation that describes this trade-off is: 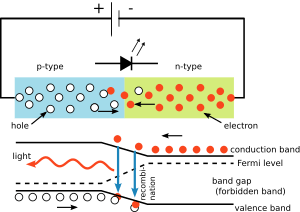 In the electric circuit shown on the right, the voltage drop across the light emitting diode (LED) depends on the material of the LED. For silicon diodes the drop is 0.6 V. However for LEDs it is between 1.8 V and 2.7 V. This information enables a user to calculate the Planck constant.

Qe is the charge on one electron.
VL is the voltage drop across the LED.

When the electron decays back again, it emits one photon of light. The energy of the photon is given by the same equation used in the photoelectric effect. If these equations are combined, the wavelength of light and the voltage are related by

The table below can be calculated from this relationship.

Value of the Planck constant and the kilogram redefinition

The reduced Planck constant (ħ) is a value that is sometimes used in quantum mechanics. It is defined by

The Planck constant can also be mathematically derived:

is the permeability of free space,

is the speed of light,

is the electric charge of electron,

is the Bohr's radius, and

All content from Kiddle encyclopedia articles (including the article images and facts) can be freely used under Attribution-ShareAlike license, unless stated otherwise. Cite this article:
Planck constant Facts for Kids. Kiddle Encyclopedia.