As time elapses—here moving left to right on the horizontal axis—the five sinusoidal waves vary, or cycle, regularly at different rates (or ratios). The red wave (top) has the lowest frequency (i.e. cycles at the slowest rate) while the purple wave (bottom) has the highest frequency (cycles at the fastest rate).

Frequency is how often an event repeats itself over a set amount of time.

In physics, the frequency of a wave is the number of wave crests that pass a point in one second (a wave crest is the peak of the wave).

Hertz (symbol Hz) is the unit of frequency.

The relationship between frequency and wavelength is expressed by the formula:

where v is speed and

(lambda) is wavelength. The formula for the frequency of light waves is

where the c is the speed of light. 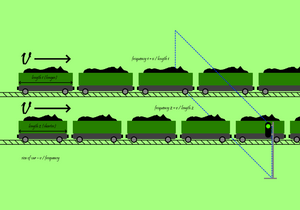 All content from Kiddle encyclopedia articles (including the article images and facts) can be freely used under Attribution-ShareAlike license, unless stated otherwise. Cite this article:
Frequency Facts for Kids. Kiddle Encyclopedia.