Sound can also mean a body of water, like a bay or channel. 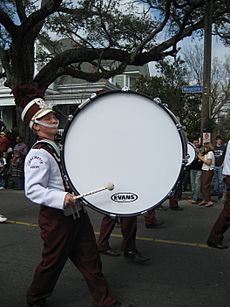 A drum produces sound via a vibrating membrane. 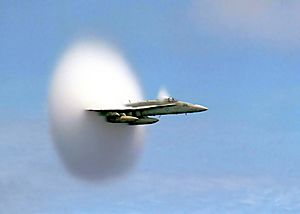 U.S. Navy F/A-18 approaching the sound barrier. The white halo is formed by condensed water droplets thought to result from a drop in air pressure around the aircraft (see Prandtl-Glauert Singularity). 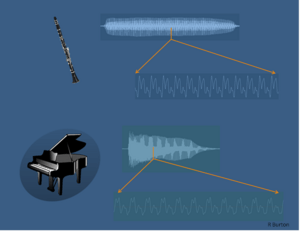 We can define a sound wave as a disturbance which travels through some medium. Sound is the term to describe what is heard when sound waves pass through a medium to the ear. All sounds are made by vibrations of molecules through which the sound travels. For instance, when a drum or a cymbal is struck, the object vibrates. These vibrations make air molecules move. Sound waves move away from their source (where they came from), traveling on the air molecules. When the vibrating air molecules reach our ears, the eardrum vibrates, too. The bones of the ear vibrate in the same way that of the object that started the sound wave.

These vibrations let you hear different sounds. Even music is vibrations. Irregular vibrations are noise. People can can make very complex sounds. We use them for speech.

The speed of sound

Sound waves can travel through solids, liquids, and gases, but it cannot travel through a vacuum (a place with nothing in it). This is why astronauts can not talk to each other in space: they need a radio to hear each other. Sound can travel through water faster than through air; and they travel even faster in solids like stone, iron, and steel. Sound travels at 335 metres (1,100 feet) per second in the air.

Pitch is the highness or lowness of sound. Pitch is how humans hear different frequencies. Frequency is determined by the number of vibrations per second. The highest key on a piano, for instance, vibrates 4,000 times per second. It has a frequency of 4000 hertz (Hz), or 4 kilohertz (kHz). Lower keys have lower frequencies. A note an octave higher than another note has twice the frequency of that note.

The intensity of a sound is how much sound energy goes through a square meter in one second. Sound waves with higher amplitude (bigger vibration) have higher intensity. The intensity of a sound is higher closer to the sound source. Farther away, it's less intense. The inverse-square law shows how sound intensity becomes smaller, farther from the source. "Inverse square" says that when distance gets multiplied by a number, sound intensity gets divided by that number squared (the number times itself). Thus, twice the distance means a quarter the intensity.

Loudness is how people sense the intensity of sound. Loudness depends on sound intensity, sound frequency, and the person's hearing.

Heard and not seen

All content from Kiddle encyclopedia articles (including the article images and facts) can be freely used under Attribution-ShareAlike license, unless stated otherwise. Cite this article:
Sound Facts for Kids. Kiddle Encyclopedia.