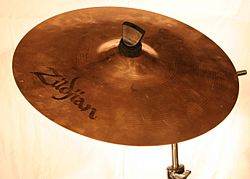 Cymbals (pronounced like the word “symbol”) are percussion instruments. They are discs made of copper, bronze or a special alloy. They look rather like saucepan lids, but in the middle they jut out a little and they have straps there that pass through a hole.

There are two ways of playing cymbals. One way is to use a pair of cymbals that are the same. The player holds one cymbal in each hand, holding them by the strap. He then bangs the cymbals together. There are many ways of doing this depending on the sort of sound that is wanted. For example, a very quiet sound can be made by rubbing the edges of the cymbals together. A very loud sound can be made by hitting them together as the arms form a circle, and letting the cymbals vibrate for a long time by holding them in the air.

Another way of playing the cymbal is to use just one cymbal, and to hang it on a stand. It can then be played with a beater, stick or wire brush. It can be hit at the edge, in the middle, or half way between, depending on the sound that is wanted.

Cymbals are made in different sizes. Some may be just 25 cm across, large ones may be up to 60 cm across. Cymbals do not normally give any particular pitch. There are, however, small ones based on an old form of cymbal which are called “crotales”. There are also Chinese cymbals which have a turned-up edge.

Cymbals are used in many different musical groups. They are heard in an orchestra, in jazz groups, percussion groups and bands, including marching bands. A drum kit always has at least one cymbal. This may be a “crash cymbal” (on the top of a stand) or a pair of hi-hats (a pair of small cymbals operated by pressing a pedal with the foot.

The word cymbals comes from the Latin cymbalum, which itself comes from the Greek word kumbalom, meaning a small bowl. It was used in many ancient cultures including Egyptian civilisations.

Cymbals are often used in orchestras. The first composer to use them was probably Joseph Haydn in his “Military Symphony” (1794). They are often used when there is a big climax (for example in the “Academic Festival Overture” by Johannes Brahms, but they can also sometimes be played very quietly. Sometimes players should let the cymbal vibrate for a long time after a big crash, but at other times he may have to hold the cymbals against his body quickly to stop the noise. This is called “damping” the sound.

Cymbals have traditionally often been played together with the bass drum. This makes a "crash-bang-wallop" noise.

All content from Kiddle encyclopedia articles (including the article images and facts) can be freely used under Attribution-ShareAlike license, unless stated otherwise. Cite this article:
Cymbal Facts for Kids. Kiddle Encyclopedia.