Some small pieces of copper in a tube. Recently processed copper is a pink color. The color changes to the more familiar orange when it reacts with air. 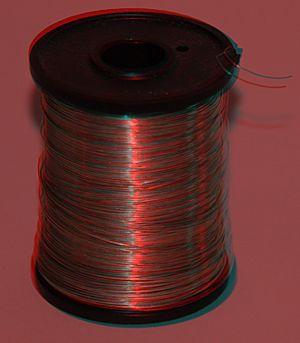 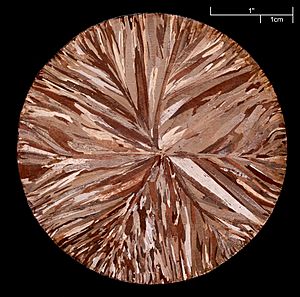 Copper is a reddish-orange color when it is pure, but soon gets a reddish tarnish after it is exposed to air.

Copper is one of the few coloured metals. Most metals are gray or silver. Gold, copper, caesium and osmium are the only four coloured metals. Copper is green as copper(II) carbonate and copper(II) hydroxide. It turns green because it oxidises. After a time in the air, copper forms green copper carbonate at the surface, called verdigris. That is why the copper roof of a building looks green.

Copper is very flexible and ductile. It can be stretched into wires easily. Copper is also very soft, it has a Mohs hardness of 2.5 to 3. That means that it is harder than a fingernail but softer than a steel pocketknife.

Copper(II) compounds have copper in +2 oxidation state. They are weak oxidizing agents. They are greenish when hydrous (water molecules added). They are more stable in air than copper(I) compounds.

Copper as a metal in the ground 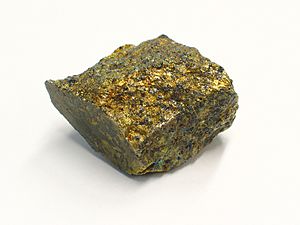 Copper can be found as a metal in the ground. Normally, it is green on the outside. Most copper is not as a metal but in chemical compounds. Chalcopyrite is the most common copper ore. It is a mixture of pyrite and copper sulfide. Copper is found in small amounts in living things. Some mollusks and arthropods have blue blood because they have copper in their blood. Animals such as humans and other mammals have red blood because it contains iron.

Copper can be used in many ways but one example is wires. Copper is used in making wires as it is easy to stretch and it is not expensive. So that’s why large wire companies will use copper as it is cheaper and takes less time to get

Copper may be the oldest metal in use, as very old copper tools have been found. Copper is used in electrical wiring. It can also be shaped into various parts. It can be used in a heat sink. The Statue of Liberty is made of copper. It is also used in pipes carrying water, because it does not corrode.

When people mix copper with tin, bronze is made. Bronze is much harder, and created the Bronze Age. It became less important when people learned to use iron better. When zinc is mixed with copper, brass is made, which is even harder than bronze. Copper with nickel makes cupronickel.

Copper is important in the human body. If a person does not get enough copper, the molecules in the body might not work. Having too much copper, though, can be a problem. Humans get most of the copper they need from food, and vitamins also contain copper to make sure we get enough. Copper compounds are also used to kill fungi and algae.

Copper is not as toxic as a metal. Copper compounds are toxic, although small amounts are needed to live. Copper is expelled from the body easily, so it does not build up in toxic effects.

Copper is sometimes just taken out of the ground and shaped into objects. But most copper is not in a metal form in the ground. Chalcopyrite is the main copper ore. It is heated with air to separate the iron as iron(II) oxide. Some copper(I) oxide is made. Sulfur dioxide is also made. Then silicon dioxide is added, which reacts with the iron(II) oxide to make a liquid which is drained. Now only copper and sulfide are left. The copper sulfide reacts with air to make copper metal and sulfur dioxide. Some copper sulfide reacts with the copper(I) oxide to make copper and sulfur dioxide. This makes impure copper.

Large amounts of copper are recycled because of its high value and the increasing depletion of worldwide copper reserves.

All content from Kiddle encyclopedia articles (including the article images and facts) can be freely used under Attribution-ShareAlike license, unless stated otherwise. Cite this article:
Copper Facts for Kids. Kiddle Encyclopedia.