This article is about the island. For the country, see Republic of Cyprus and Northern Cyprus. 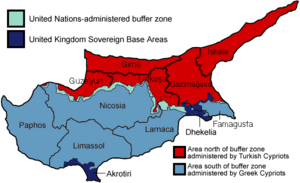 Areas of Cyprus; the Turkish Republic is red, the Republic light blue, the buffer zone greenish, and the naval bases dark blue

Cyprus is a Mediterranean island off the coasts of Syria and Turkey. It is the third-largest island in the Mediterranean; Sicily and Sardinia are larger. It is slightly larger than Puerto Rico. Geographically, it is part of Asia and in the Middle East, but for political reasons, it is sometimes counted as being part of Europe. There are two states on the island:

These states are separated by a buffer zone, which is controlled by the United Nations. In addition to the two countries, there are Akrotiri and Dhekelia, two territories which are under British control, and which are used as military bases.

In its thousands of years of recorded history, many empires have ruled Cyprus. They include Assyria, ancient Egypt Persia, Alexander the Great, the Roman Empire, the Byzantines, Arab caliphates for a short period, France, the Republic of Venice and the Ottoman Empire.

All content from Kiddle encyclopedia articles (including the article images and facts) can be freely used under Attribution-ShareAlike license, unless stated otherwise. Cite this article:
Cyprus Facts for Kids. Kiddle Encyclopedia.