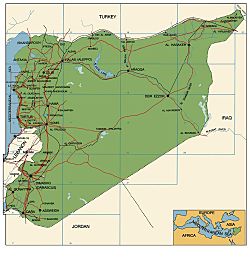 A map of Syria

Syria is a country in the Middle East, the west part of Asia. It borders (from south to north) on Lebanon, Israel, Jordan, Iraq, and Turkey. Its western part faces the Mediterranean Sea. Its eastern and northern parts are mountainous.

The current president and head of state is Bashar al-Assad. Syria's national capital is Damascus. The biggest city is Aleppo. A Syrian civil war began in 2011. 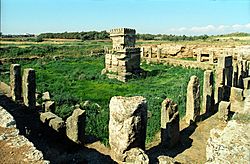 Syria has a very long history. It was a land of Phoenicians. Later it became part of the Achaemenid Empire, Roman Empire and then the Eastern Roman Empire. In those days people spoke the Syriac language. The city Antioch was great and one of the important cities in Christendom. In the Arab Empire people began to speak the Arabic language. Today most Syrian people believe in Islam but there are still Christians too.

When World War I ended, France was given control over Lebanon and Syria. Britain was given power over Iraq, Jordan and Palestine. A border was drawn between Iraq and Syria in 1920. France controlled Syria until 1946. That year Syria became its own country.

Syria was part of the United Arab Republic with Egypt in 1958-1961. Syria had some wars with Israel and some territories like the Golan Plateau were occupied by Israel. 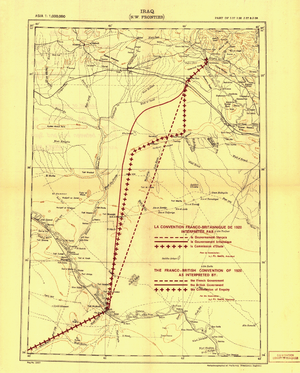 The line in the middle of this map is the border drawn in 1920 separating Iraq and Syria.

In 2012 with the Arab Spring a bloody civil war began against President Bashar al-Assad.

Syria lies between latitudes 32° and 38° N, and longitudes 35° and 43° E. The climate varies from the humid Mediterranean coast, through a semiarid steppe zone, to arid desert in the east. The country consists mostly of arid plateau, although the northwest part bordering the Mediterranean is fairly green. Al-Jazira in the northeast and Hawran in the south are important agricultural areas. The Euphrates, Syria's most important river, crosses the country in the east. Syria is one of the fifteen states that comprise the so-called "cradle of civilization". Its land straddles the "northwest of the Arabian plate".

Petroleum in commercial quantities was first discovered in the northeast in 1956. The most important oil fields are those of Suwaydiyah, Qaratshui, Rumayian, and Tayyem, near Dayr az–Zawr. The fields are a natural extension of the Iraqi fields of Mosul and Kirkuk. Petroleum became Syria's leading natural resource and chief export after 1974. Natural gas was discovered at the field of Jbessa in 1940.

Syria is a republic. The old Constitution of Syria was started on 13 March 1971. It made Syria as a secular socialist state. Islam was the majority religion. A new constitution has been in place since 2012.

The executive branch is the president, two vice presidents, the prime minister, and the Council of Ministers. The constitution says the president must be a Muslim. It does not make Islam the state religion. According to the 2012 constitution, the president is elected by Syrian people in a direct election.

The People's Council is the legislative branch.

Nearly all of Syria’s radio and television outlets are state owned. The Ba'ath Party controls nearly all newspapers.

The President of Syria is commander in chief of the Syrian armed forces. There are about 400,000 troops. Males must go in the military when they are age 18. 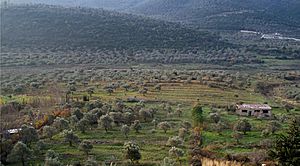 Syria is a middle-income country. The economy is based on agriculture, oil, industry, and tourism.

Syria has three international airports (Damascus, Aleppo and Lattakia). They are hubs for Syrian Air. Foreign airlines also fly to them. Most Syrian cargo is carried by Chemins de Fer Syriens, the Syrian railway company.

Most people live in the Euphrates valley and along the coastal plain, a fertile strip between the coastal mountains and the desert.

Education is free from ages 6 to 12. All children this age must attend school.

The most popular sports in Syria are football, basketball, swimming, and tennis. Damascus was home to the fifth and seventh Pan Arab Games. Many popular football teams are based in Damascus, Aleppo, Homs, and Latakia. 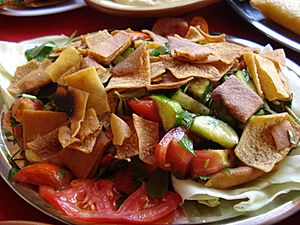 Syrian cuisine is rich and varied in its ingredients, linked to the regions of Syria where a specific dish has originated. Syrian food mostly consists of Southern Mediterranean, Greek, and Southwest Asian dishes. Some Syrian dishes also evolved from Turkish and French cooking: dishes like shish kebab, stuffed zucchini/courgette, and yabraʾ (stuffed grape leaves, the word yabraʾ deriving from the Turkish word yaprak, meaning leaf).

Drinks in Syria vary, depending on the time of day and the occasion. Arabic coffee is the most well-known hot drink, usually prepared in the morning at breakfast or in the evening. It is usually served for guests or after food. Arak, an alcoholic drink, is a well-known beverage, served mostly on special occasions. Other Syrian beverages include ayran, jallab, white coffee, and a locally manufactured beer called Al Shark.

All content from Kiddle encyclopedia articles (including the article images and facts) can be freely used under Attribution-ShareAlike license, unless stated otherwise. Cite this article:
Syria Facts for Kids. Kiddle Encyclopedia.