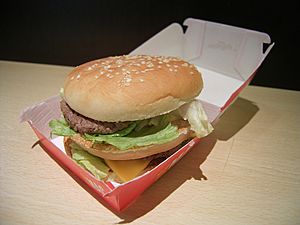 Big Mac hamburgers, like this one from Japan, are similar worldwide.

There are two ways to measure GDP (total income of a country) of different countries and compare them. One way, called GDP at exchange rate, is when the currencies of all countries are converted into USD (United States Dollar). The second way is GDP (PPP) or GDP at Purchasing Power Parity (PPP).

Purchasing Power Parity (PPP) is measured by finding the values (in USD) of a basket of consumer goods that are present in each country (such as orange juice, pencils, etc.). If that basket costs $100 in the US and $200 in England, then the purchasing power parity exchange rate is 1:2.

What sets GDP (PPP) apart from other economic indicators, such as GDP per capita, nominal GDP, and real GDP, is that GDP (PPP) takes the costs of living into account. This explains why GDP (PPP) is used to measure the quality of life in a country. However, when measuring a country's economic power (i.e. what it can buy on the world market), use GDP at exchange rate.

For example, suppose that Japan has a higher GDP per capita ($18) than the US ($16). That means that Japanese on average make $2 more than normal Americans. However, they are not necessarily richer. Suppose that one gallon of orange juice costs $6 in Japan and only $2 in the US; then $6 in Japan exchanges to only $2 worth of US goods, since the Japanese can only buy 3 gallons while the Americans can buy 8 gallons. Therefore, in terms of orange juice, the Americans are richer, and in this example the US has a GDP (PPP) of $16, since the $16 can buy 8 gallons of orange juice (by definition), while Japan has GDP (PPP) of only $6, since the $18 in Japan can only buy 3 gallons of orange juice, which represents only $6 of US goods.

All content from Kiddle encyclopedia articles (including the article images and facts) can be freely used under Attribution-ShareAlike license, unless stated otherwise. Cite this article:
Purchasing Power Parity Facts for Kids. Kiddle Encyclopedia.