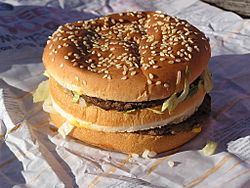 McDonald's Big Mac purchased in Australia.
In July 2008 this would have cost $AUD 3.45 compared with $3.57 in the United States - the implied purchasing power parity based on the prices of the burger in the two countries at that time was close to the actual exchange rate.

The Big Mac Index is an economic index which compares the purchasing power of two currencies. It looks at how expensive a Big Mac is in different countries.

The Big Mac Index was first written about in The Economist magazine in September 1986. They have published the index each year since then. The McDonald's Big Mac was chosen because it is made in a similar way with similar ingredients in many countries around the world.

For example, using figures in July 2008:

All content from Kiddle encyclopedia articles (including the article images and facts) can be freely used under Attribution-ShareAlike license, unless stated otherwise. Cite this article:
Big Mac Index Facts for Kids. Kiddle Encyclopedia.