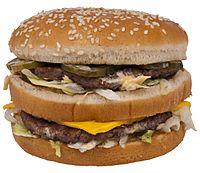 The Big Mac is a kind of sandwich sold at the fast food-chain McDonald's. It is 550 calories, and is made using two beef patties, Mac Sauce, dehydrated onions, shredded lettuce, sliced pickles, and a slice of cheese. Also, the Big Mac Index is measured in how much a Big Mac costs in foreign currencies.

The Big Mac was created by Jim Delligatti, one of Ray Kroc's earliest franchisees, who was the owner of some restaurants in the Pittsburgh, Pennsylvania area. It was designed to compete with a similar Big Boy sandwich. Customer response to the Big Mac was so good that it was begun to be made nationally in 1967. One of its well-known and unique features is a middle slice of bread ("club" layer) used to make sure the contents do not move about and to prevent spills.

All content from Kiddle encyclopedia articles (including the article images and facts) can be freely used under Attribution-ShareAlike license, unless stated otherwise. Cite this article:
Big Mac Facts for Kids. Kiddle Encyclopedia.