A pickled cucumber, most often simply called a pickle in the United States and Canada, is a cucumber that has been processed in a brine or vinegar solution and left to ferment for a period of time. Pickling is also used for many other things, such as onions, cabbage, and herring. One common type of pickle is the dill pickle. It is commonly used as a topping on meat products such as hamburgers, but can also be eaten on its own.

A gherkin is a variety of cucumber: the West Indian or burr gherkin (Cucumis anguria), which produces a somewhat smaller fruit than the garden cucumber (Cucumis sativus). Gherkins are cooked, eaten raw, or used as pickles. Gherkins are usually picked when 4 to 8 cm (1 to 3 in) in length and pickled in jars or cans with vinegar (often flavoured with herbs, particularly dill; hence, "dill pickle") or brine. Sugar is also a popular addition, in which case the label typically shows "Sweet Gherkins".

Cornichons are tart French pickles made from small gherkins pickled in vinegar and tarragon. They traditionally accompany pâtés and cold cuts. 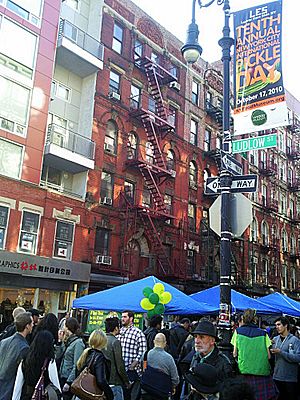 Brined pickles are prepared using the traditional process of natural fermentation in a brine which makes them grow sour. The brine concentration can vary between 20 to more than 40 grams of salt per litre of water (3.2–6.4 oz/imp gal or 2.7–5.3 oz/US gal). There is no vinegar used in the brine of naturally fermented pickled cucumbers.

The fermentation process is dependent on the Lactobacillus bacteria that naturally occur on the skin of a growing cucumber. These may be removed during commercial harvesting and packing processes. Bacteria cultures can be reintroduced to the vegetables by adding already fermented foods such as yogurt or other fermented milk products, pieces of sourdough bread and of course pickled vegetables such as sauerkraut.

Typically, small cucumbers are placed in a glass or ceramic vessel or a wooden barrel, together with a variety of spices. Among those traditionally used in many recipes are garlic, horseradish, whole dill stems with umbels and green seeds, white mustard seeds, grape, oak, cherry, blackcurrant and bay laurel leaves, dried allspice fruits, and—most importantly—salt. The container is then filled with cooled, boiled water and kept under a non-airtight cover (often cloth tied on with string or a rubber band) for several weeks, depending on taste and external temperature. Traditionally stones, also sterilized by boiling, are placed on top of the cucumbers to keep them under the water. The more salt is added the more sour the cucumbers become.

Since they are produced without vinegar, a film of bacteria forms on the top, but this does not indicate they have spoiled, and the film is simply removed. They do not, however, keep as long as cucumbers pickled with vinegar, and usually must be refrigerated. Some commercial manufacturers add vinegar as a preservative.

A "kosher" dill pickle is not necessarily kosher in the sense that it has been prepared in accordance with Jewish dietary law. Rather, it is a pickle made in the traditional manner of Jewish New York City pickle makers, with generous addition of garlic and dill to a natural salt brine.

In New York terminology, a "full-sour" kosher dill is one that has fully fermented, while a "half-sour", given a shorter stay in the brine, is still crisp and bright green. Elsewhere, these pickles may sometimes be termed "old" and "new" dills.

Dill pickles (not necessarily described as "kosher") have been served in New York City since at least 1899. 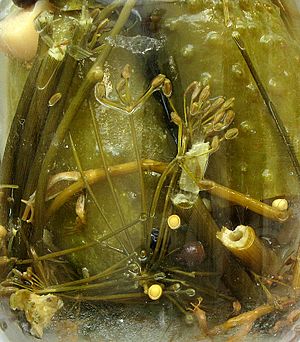 The Polish- or German-style pickled cucumber, was developed in the northern parts of central and eastern Europe. It has been exported worldwide and is found in the cuisines of many countries, including the United States, where it was introduced by immigrants. It is sour, similar to the kosher dill, but tends to be seasoned differently.

Traditionally it was preserved in wooden barrels, but now is sold in glass jars. A cucumber only pickled for a few days is different in taste (less sour) than one pickled for a longer time and is called ogórek małosolny, which literally means "low-salt cucumber." This distinction is similar to the one between half- and full-sour types of kosher dills (see above).

Another kind of pickled cucumber popular in Poland is ogórek konserwowy ("preserved cucumber") which is rather sweet and vinegary in taste, due to different composition of the preserving solution.

Pickles also have a traditional role in Germany. During Christmas time, the pickle ornament is always hung last, and is hidden. The first child to find the hidden pickle receives an extra gift.

In Hungary, while regular vinegar-pickled cucumbers (Hungarian: savanyú uborka) are made during most of the year, during the summer kovászos uborka ("leavened pickles") are made without the use of vinegar. Cucumbers are placed in a glass vessel along with spices (usually dill and garlic), water and salt. Additionally, a slice or two of bread are placed at the top and bottom of the solution, and the container is left to sit in the sun for a few days so the yeast in the bread can help cause a fermentation process.

In Romania, cucumbers are one of the vegetables used for Murături. 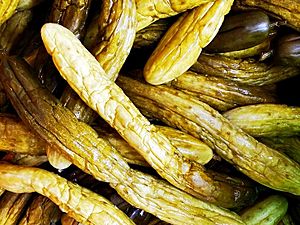 Lime pickles are soaked in pickling lime (not to be confused with the citrus fruit) rather than in a salt brine. This is done more to enhance texture (by making them crisper) rather than as a preservative. The lime is then rinsed off the pickles. Vinegar and sugar are often added after the 24-hour soak in lime, along with pickling spices. 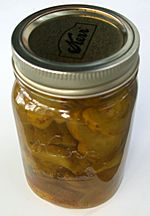 A jar of bread-and-butter pickles

Bread-and-butter pickles are a marinated pickle produced with sliced cucumbers in a solution of vinegar, sugar and spices which may be processed either by canning or simply chilled as refrigerator pickles. The origin of the name and the spread of their popularity in the United States is attributed to Omar and Cora Fanning, a pair of Illinois cucumber farmers who started selling sweet and sour pickles in the 1920s and filed for the trademark "Fanning's Bread and Butter Pickles" in 1923 (though the recipe and similar ones are probably much older). The story attached to the name is that the Fannings survived rough years by making the pickles with their surplus of undersized cucumbers and bartering them with their grocer for staples such as bread and butter.

Bright red, cinnamon-flavored pickles produced by a multiday process are sometimes seen as a Christmas treat. They are somewhat similar to canned red cinnamon apple rings in color and texture.

Swedish pickled cucumbers (pressgurka) are thinly sliced, mixed with salt and pressed to drain some water from the cucumber slices. Afterwards placed in a jar with a sour-sweet brine of vinegar, sugar, dill and mustard seeds.

Danish cucumber salad (agurkesalat) is similar, but the cucumbers are not pressed and the brine doesn't have parsley. The cucumber salad accompanies meat dishes, especially a roasted chicken dish (gammeldags kylling med agurkesalat), and is used on Danish hot dogs.

There are also "long time pickles", which call for some months of cool storing in order to be edible. In southern Sweden and Denmark a solution of water, mild acidic vinegar (not made of wine and as clear as water), sugar and the top of dill plants, known as krondill (English: crown dill) and a little salt. In Sweden this is known as "Ättiksgurka" (English: vinegar cucumber) and has a crispy sweet and sour taste. Further north in Sweden some of the acidic vinegar and all the sugar are replaced with more salt. This is known as "saltgurka". Both "ättiksgurka" and "saltgurka" are used as a minor part of certain dishes.

Kool-Aid pickles or "koolickles", enjoyed by children in parts of the Southern United States, are created by soaking dill pickles in a mixture of Kool-Aid and pickle brine.

All content from Kiddle encyclopedia articles (including the article images and facts) can be freely used under Attribution-ShareAlike license, unless stated otherwise. Cite this article:
Pickled cucumber Facts for Kids. Kiddle Encyclopedia.