Kimchi, also spelled kimchee or gimchi, is a traditional fermented Korean side dish made of vegetables with many seasonings. In traditional preparation, kimchi was stored underground in jars to keep cool during the summer months and unfrozen during the winter months. There are hundreds of varieties of kimchi made with different vegetables as the main ingredients.

It is a famous traditional side dish of salted and fermented vegetables, such as napa cabbage and Korean radish, made with a widely varying selection of seasonings including gochugaru (chili powder), scallions, garlic, ginger, and jeotgal (salted seafood).

Traditionally, kimchi was stored in-ground in large earthenware to prevent the kimchi from being frozen during the winter months. It was the primary way of storing vegetables throughout the seasons. In the summer the in-ground storage kept the kimchi cool enough to slow down the fermentation process.

In Korea kimchi pots are a common sight. They are large terra cotta pots where the kimchi is stored until it can be eaten or until it ferments. Kimchi usually takes about 2 weeks to ferment, but some varieties can be eaten right away. Some must be stored for over a year to be finished. The fermentation gives the kimchi a pickle-like quality.

Kimchi is usually very strong for non-Koreans. There are many different types and Koreans typically eat kimchi in every meal. It is a staple of Korean food. Kimchi can be stored for a long time and it does not go bad easily. However, when it is exposed to hot weather for certain time, kimchi turns sour. So, it should not be put out unless it is going to be eaten soon. 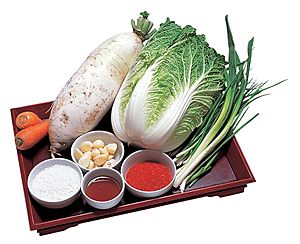 The most common variety of kimchi is made from cabbage, radish, garlic, red pepper, salt and sugar. The cabbage is soaked in salt water for a few hours. Coarse rock salt is then rubbed in between the leaves of the cabbage. Red peppers are also rubbed in and most kimchi has a lot of pepper in it. 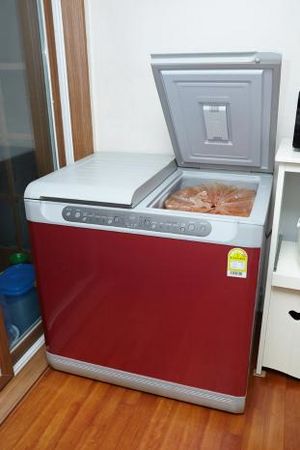 The radish is usually cut into long thin strips and added to the mix. A little sugar is added to help the fermentation process along much in the same way beer is made. Kimchi varieties are determined by the main vegetable ingredients and the mix of seasoning used to flavor the kimchi.

The amounts of each ingredient vary between the type of kimchi you are making and the personal taste of the maker. Most kimchi has a special taste with shrimp or fish. Kimchi can be eaten alone or with white rice, but it is also included in recipes of other traditional dishes, including porridges, soups, and rice cakes.

The kimchi is allowed to ferment for a period of time, usually outdoors in a large kimchi pot. It is also quite common for these pots to be buried under ground. Kimchi can be kept for a long time and does not go bad. Koreans make kimchi with their families in December.

All content from Kiddle encyclopedia articles (including the article images and facts) can be freely used under Attribution-ShareAlike license, unless stated otherwise. Cite this article:
Kimchi Facts for Kids. Kiddle Encyclopedia.