Ginger is commonly used as a cooking spice throughout the world. It is the rhizome of the perennial plant Zingiber officinale in the family Zingiberaceae. The ginger plant has a long history of cultivation, known to have come from China and then spread to India, Southeast Asia, West Africa, and the Caribbean.

Ginger is also a term used to describe a red-brown colour, as in ginger hair. They are usually called foreignisms.

Ginger likely originated as ground flora of tropical lowland forests in regions from the Indian subcontinent to southern Asia, where its cultivation remains among the world's largest producers, including India, China, and other countries of southern Asia (see Production). Numerous wild relatives are still found in these regions, and in tropical or subtropical world regions, such as Hawaii, Japan, Australia, and Malaysia. 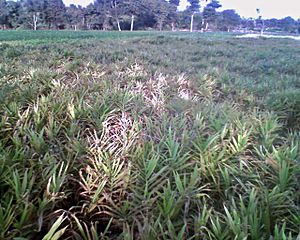 Ginger produces clusters of white and pink flower buds that bloom into yellow flowers. Because of its aesthetic appeal and the adaptation of the plant to warm climates, it is often used as landscaping around subtropical homes. It is a perennial reed-like plant with annual leafy stems, about a meter (3 to 4 feet) tall. Traditionally, the rhizome is gathered when the stalk withers; it is immediately scalded, or washed and scraped, to kill it and prevent sprouting. The fragrant perisperm of the Zingiberaceae is used as sweetmeats by Bantu, and also as a condiment and sialagogue. 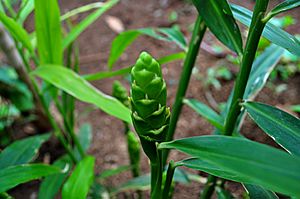 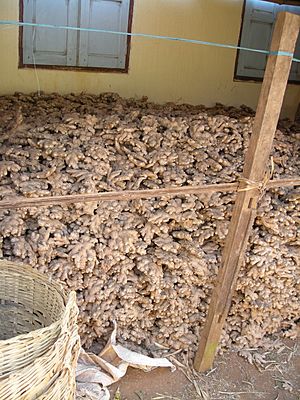 Ginger produces a hot, fragrant kitchen spice. Young ginger rhizomes are juicy and fleshy with a mild taste. They are often pickled in vinegar or sherry as a snack or cooked as an ingredient in many dishes. They can be steeped in boiling water to make ginger herb tea, to which honey may be added. Ginger can be made into candy or ginger wine.

Mature ginger rhizomes are fibrous and nearly dry. The juice from ginger roots is often used as a seasoning in Indian recipes and is a common ingredient of Chinese, Korean, Japanese, Vietnamese, and many South Asian cuisines for flavoring dishes such as seafood, meat, and vegetarian dishes.

Fresh ginger can be substituted for ground ginger at a ratio of six to one, although the flavors of fresh and dried ginger are somewhat different. Powdered dry ginger root is typically used as a flavoring for recipes such as gingerbread, cookies, crackers and cakes, ginger ale, and ginger beer. Candied ginger, or crystallized ginger, is the root cooked in sugar until soft, and is a type of confectionery. Fresh ginger may be peeled before eating. For longer-term storage, the ginger can be placed in a plastic bag and refrigerated or frozen. 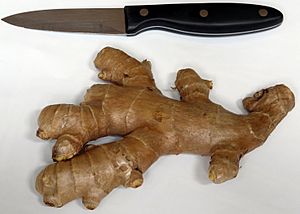 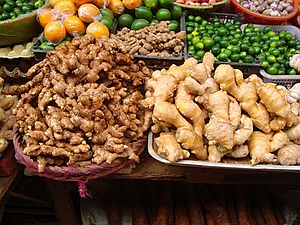 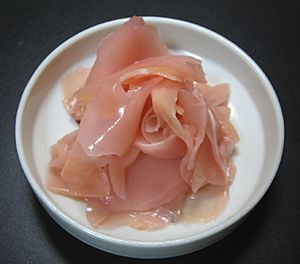 Gari, a type of pickled ginger

In Indian cuisine, ginger is a key ingredient, especially in thicker gravies, as well as in many other dishes, both vegetarian and meat-based. Ginger also has a role in traditional Ayurvedic medicine. It is an ingredient in traditional Indian drinks, both cold and hot, including spiced masala chai. Fresh ginger is one of the main spices used for making pulse and lentil curries and other vegetable preparations. Fresh ginger together with peeled garlic cloves is crushed or ground to form ginger garlic masala. Fresh, as well as dried, ginger is used to spice tea and coffee, especially in winter. In south India, "sambharam" is a summer yogurt drink made with ginger as a key ingredient, along with green chillies, salt and curry leaves. Ginger powder is used in food preparations intended primarily for pregnant or nursing women, the most popular one being katlu, which is a mixture of gum resin, ghee, nuts, and sugar. Ginger is also consumed in candied and pickled form.

In Japan, ginger is pickled to make beni shoga and gari or grated and used raw on tofu or noodles. It is made into a candy called shoga no sato zuke. In the traditional Korean kimchi, ginger is either finely minced or just juiced to avoid the fibrous texture and added to the ingredients of the spicy paste just before the fermenting process.

In Burma, ginger is called gyin. It is widely used in cooking and as a main ingredient in traditional medicines. It is consumed as a salad dish called gyin-thot, which consists of shredded ginger preserved in oil, with a variety of nuts and seeds.

In Thailand' where it is called ขิง khing, it is used to make a ginger garlic paste in cooking.

In Indonesia, a beverage called wedang jahe is made from ginger and palm sugar. Indonesians also use ground ginger root, called jahe, as a common ingredient in local recipes.

In Malaysia, ginger is called halia and used in many kinds of dishes, especially soups.

Called luya in the Philippines, ginger is a common ingredient in local dishes and is brewed as a tea called salabat.

In Vietnam, the fresh leaves, finely chopped, can be added to shrimp-and-yam soup (canh khoai mỡ) as a top garnish and spice to add a much subtler flavor of ginger than the chopped root.

In China, sliced or whole ginger root is often paired with savory dishes such as fish, and chopped ginger root is commonly paired with meat, when it is cooked. Candied ginger is sometimes a component of Chinese candy boxes, and a herbal tea can be prepared from ginger.

In the Caribbean, ginger is a popular spice for cooking and for making drinks such as sorrel, a drink made during the Christmas season. Jamaicans make ginger beer both as a carbonated beverage and also fresh in their homes. Ginger tea is often made from fresh ginger, as well as the famous regional specialty Jamaican ginger cake. 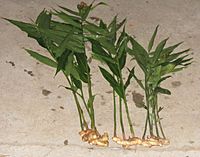 On the island of Corfu, Greece, a traditional drink called τσιτσιμπύρα (tsitsibira), a type of ginger beer, is made. The people of Corfu and the rest of the Ionian islands adopted the drink from the British, during the period of the United States of the Ionian Islands.

In Arabic, ginger is called zanjabil and in some parts of the Middle East, gin�gayu (生姜湯). The Hebrew name for the spice, zangevil, is a variation on the name.

In Western cuisine, ginger is traditionally used mainly in sweet foods such as ginger ale, gingerbread, ginger snaps, parkin, ginger biscuits, and speculaas. A ginger-flavored liqueur called Canton is produced in Jarnac, France. Ginger wine is a ginger-flavored wine produced in the United Kingdom, traditionally sold in a green glass bottle. Ginger is also used as a spice added to hot coffee and tea. 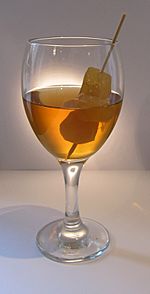 All content from Kiddle encyclopedia articles (including the article images and facts) can be freely used under Attribution-ShareAlike license, unless stated otherwise. Cite this article:
Ginger Facts for Kids. Kiddle Encyclopedia.