Noodles are a staple food in many cultures. They are made from unleavened dough which is stretched, extruded, or rolled flat and cut into one of a variety of shapes. While long, thin strips may be the most common, many varieties of noodles are cut into waves, helices, tubes, strings, or shells, or folded over, or cut into other shapes. Noodles are usually cooked in boiling water, sometimes with cooking oil or salt added. They are often pan-fried or deep-fried. Noodles are often served with an accompanying sauce or in a soup. Noodles can be refrigerated for short-term storage or dried and stored for future use. The material composition or geocultural origin must be specified when discussing noodles. The word derives from the German word Nudel. 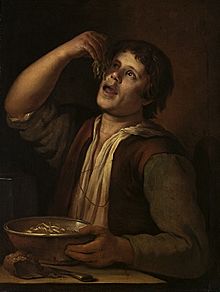 The origin of noodles is Chinese, and the earliest written record of noodles is found in a book dated to the Eastern Han period (25–220). Noodles were often made from wheat dough. It become a staple food for the people of the Han dynasty (206 BCE – 220 CE).

A Nature article claimed the oldest evidence of noodle consumption was from 4,000 years ago in China. In 2005, a team of archaeologists reported finding an earthenware bowl that contained 4000-year-old noodles at the Lajia archaeological site. These noodle were said to resemble lamian, which are a type of Chinese noodle that is made by repeatedly pulling and stretching the dough by hand. 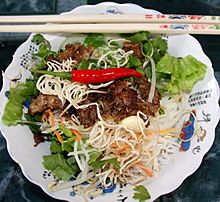 A bowl of Bún thịt nướng

Wheat noodles in Japan (udon) were adapted from a Chinese recipe by a Buddhist monk as early as the 9th century. Reshteh noodles were eaten by the people of Persia by the 13th century. Innovations continued, as for example, noodles made from buckwheat (naengmyeon) were developed in the Joseon Dynasty of Korea (1392–1897). Ramen noodles, based on Chinese noodles, became popular in Japan by 1900.

Europe and the Near East

In the 1st century BCE, Horace wrote of fried sheets of dough called lagana. However, the method of cooking these sheets of dough, lagana, does not correspond to the current definition of either a fresh or dry pasta product, which only had similar basic ingredients and perhaps the shape. In the 2nd century CE, the Greek physician Galen mentioned itrion, referring to all homogenous mixtures from flour and water. The Latinized itrium was used as a reference to a kind of boiled dough. The Jerusalem Talmud records that itrium was common in the Byzantine Provinces of Palaestina Prima and Palaestina Secunda from the 3rd to 5th centuries CE. Arabs adapted noodles for long journeys in the 5th century, the first written record of dry pasta. The 9th-century, Arab physician Isho bar Ali defines itriyya, the Arabic cognate of the Greek word, as string-like shapes made of semolina and dried before cooking. Muhammad al-Idrisi wrote in 1154 that itriyya was manufactured and exported from Norman Sicily. Itriya was also known by the Aramaic speakers under the Persian sphere and during the Islamic rule referred to a small soup noodle prepared by twisting bits of kneaded dough into shape.

The first concrete information on pasta products in Italy dates to the 13th or 14th centuries. Pasta has taken on a variety of shapes, often based on regional specializations. Since at least the 20th century, pasta has become a staple in North America and elsewhere.

In the area that would become Germany, written mention of Spätzle has been found in documents dating from 1725, although medieval illustrations are believed to place this noodle at an even earlier date.

Zacierki is a type of noodle found in Polish cuisine. It was part of the rations distributed in the Łódź Ghetto in German-occupied Poland. (Out of the "major ghettos", Łódź was the most affected by hunger, starvation and malnutrition-related deaths.) The diary of a young girl from Łódź recounts a fight she had with her father over a spoonful of zacierki taken from the family's meager supply of 200 grams. 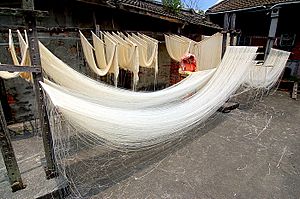 Making Misua, a kind of noodles made from wheat flour, in Taiwan 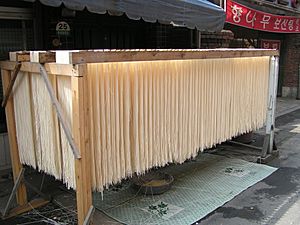 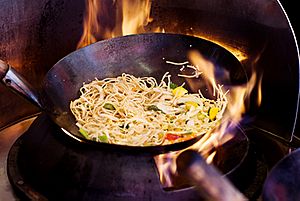 All content from Kiddle encyclopedia articles (including the article images and facts) can be freely used under Attribution-ShareAlike license, unless stated otherwise. Cite this article:
Noodle Facts for Kids. Kiddle Encyclopedia.