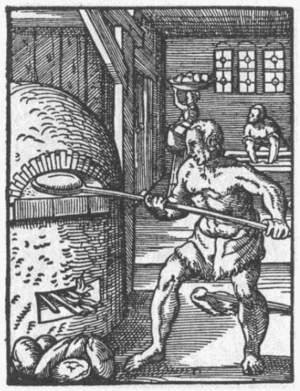 Baker putting bread into an oven, 1568

Baking is a skill or way of cooking food in an oven. Sometimes, though, baking can also be done in hot ashes, or hot stones. It is used for making bread, cakes, pastries, pies, tarts, cookies, and much more. Such foods made by baking are called "baked goods".

The ingredients used in baking include flour, water, leavening agents (baker's yeast, baking soda, baking powder), shortening (fats, oils), eggs, milk, and sugars. These are all mixed together to create dough or batter, which is then put into a pan or a sheet and heated. Leavening agents produce gas that becomes trapped in the dough. This makes it rise. Shortening makes doughs more easily workable and the bread that comes out in the end more soft and tender. Egg whites are used to help make a light, airy texture.

Baked goods are sold at a bakery. A person who makes baked goods as a job is called a baker. It is also used for making baked potatoes, baked apples, baked beans, some casseroles and pasta dishes such as lasagna, and various other foods, such as the pretzel.

In ancient history, the first baking happened when humans took wild grass grains, and soaked them in water. Then they mixed everything together, and also mashed it. After that, this mixture was poured onto a flat, hot rock, and roasted on hot embers. This new way of making bread was much easier than the other ways of doing so. This was because bread could be made anytime if there was fire.

Around 2500 BC Egyptians had bread, and may have learned how to make it from the Babylonians. Also, the Greeks around 400 B.C. tarts with patterns and honey was included in Greek food. Dispyrus, another type of baked good, was also made by the Greeks around that time. It was popular. Dispyrus was a donut-like bread made from flour and honey and shaped in a ring. Soaked in wine, it was eaten when hot. The first proof of stone ovens was in Italy, where they made pizza and pasta.

Baking was very popular in the Roman Empire. In about 300 B.C., the pastry cook became a special job for Romans (called the pastillarium). Romans loved pastry, which was often cooked for large parties. Baking became so popular during the Roman Empire that someone who could think of a new kind of pastry was given an award. Around 1 AD there were more than 300 pastry chefs in Rome.

Eventually, because of Rome, the art of baking became known in Europe. It later spread to the eastern parts of Asia, too. Bakers sometimes bake goods at home and then sell them in the streets. In London, chefs sold their baked goods from handcarts. In Paris, the first café of baked goods was made. Baking became a real art in the world. Cakes can be actually mixed in just a few minutes, with only a small bit of skill needed, and it can be lifted fresh from the oven in less than 30 minutes. A basic loaf of bread may take slightly longer time, but it does not demand a lot of time from the cook.

All content from Kiddle encyclopedia articles (including the article images and facts) can be freely used under Attribution-ShareAlike license, unless stated otherwise. Cite this article:
Baking Facts for Kids. Kiddle Encyclopedia.