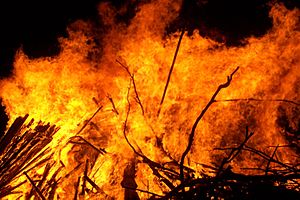 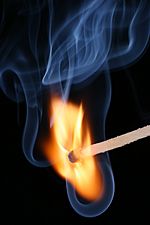 A match on fire

Fire is a chemical reaction that gives off light and heat. It is an example of the chemical process of oxidation.

Fires are usually combustion reactions that take carbon, hydrogen, and oxygen. Fires can occur in many ways and there are many types of fire which, if not treated correctly, can cause total devastation. There are wood fires, gas fires, metal fires, and more.

Wood fires can usually be put out with water used to absorb the heat, but metal fires are too hot for water to absorb enough heat to put out the fire. If water is used to extinguish ("put out") a metal fire, the water will simply evaporate. For metal fires, sand can be used to cover the fire and choke it off from obtaining oxygen. A fire extinguisher can put out most fires.

Fire is very hot. A person should never touch fire, because fire may burn anything that gets too close. If human skin touches fire, the skin may blister which can take some time to heal. If a fire occurs, the mouth should be covered with a wet cloth because if too much smoke is breathed in, it is possible to faint. No fuel source should be near fire while human contact is active.

Making fire by rubbing two pieces of firewood together

Fire can be very useful if it is treated carefully. It has always been very important for people to be able to make fire, because people need its heat on cold days and to cook things. Its light is also useful to be able to see in dark places.

If fire is not treated carefully, it can be very dangerous. A fire that got out of control once destroyed 17,400 km²,an area the size of New York City, in the United States

Fire needs three things to burn: oxygen, fuel, and heat. Fuels can be wood, tinder, coal, oil or any other substance that will easily oxidize. Once a fire is burning, it creates its own heat, which allows the fire to keep burning on its own for some time. 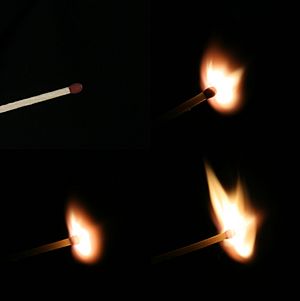 Process of ignition of a match 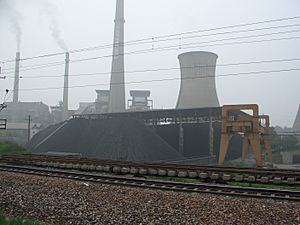 A coal-fired power station in the People's Republic of China

The ability to control fire was a dramatic change in the habits of early humans. Making fire to generate heat and light made it possible for people to cook food, simultaneously increasing the variety and availability of nutrients and reducing disease by killing organisms in the food. The heat produced would also help people stay warm in cold weather, enabling them to live in cooler climates. Fire also kept nocturnal predators at bay. Evidence of cooked food is found from 1.9 million years ago, although there is a theory that fire could have been used in a controlled fashion about 1 million years ago. Evidence becomes widespread around 50 to 100 thousand years ago, suggesting regular use from this time; resistance to air pollution started to evolve in human populations at a similar point in time. The use of fire became progressively more sophisticated, with it being used to create charcoal and to control wildlife from tens of thousands of years ago.

By the Neolithic Revolution, during the introduction of grain-based agriculture, people all over the world used fire as a tool in landscape management. These fires were typically controlled burns or "cool fires", as opposed to uncontrolled "hot fires", which damage the soil. Hot fires destroy plants and animals, and endanger communities. This is especially a problem in the forests of today where traditional burning is prevented in order to encourage the growth of timber crops. Cool fires are generally conducted in the spring and autumn. They clear undergrowth, burning up biomass that could trigger a hot fire should it get too dense. They provide a greater variety of environments, which encourages game and plant diversity. For humans, they make dense, impassable forests traversable.

Another human use for fire in regards to landscape management is its use to clear land for agriculture. Slash-and-burn agriculture is still common across much of tropical Africa, Asia and South America. "For small farmers, it is a convenient way to clear overgrown areas and release nutrients from standing vegetation back into the soil," said Miguel Pinedo-Vasquez, an ecologist at the [Earth Institute’s Center for Environmental Research and Conservation]. However this useful strategy is also problematic. Growing population, fragmentation of forests and warming climate are making the earth's surface more prone to ever-larger escaped fires. These harm ecosystems and human infrastructure, cause health problems, and send up spirals of carbon and soot that may encourage even more warming of the atmosphere–and thus feed back into more fires. Globally today, as much as 5 million square kilometers–an area more than half the size of the United States–burns in a given year.

There are numerous modern applications of fire. In its broadest sense, fire is used by nearly every human being on earth in a controlled setting every day. Users of internal combustion vehicles employ fire every time they drive. Thermal power stations provide electricity for a large percentage of humanity.

A fire can be stopped in three different ways, by removing any of the three things it needs to burn:

However, some fires cannot be smothered, such as magnesium flames. They can burn in CO2, nitrogen, and some other elemental compounds, although they cannot burn in noble gases such as helium.

All content from Kiddle encyclopedia articles (including the article images and facts) can be freely used under Attribution-ShareAlike license, unless stated otherwise. Cite this article:
Fire Facts for Kids. Kiddle Encyclopedia.