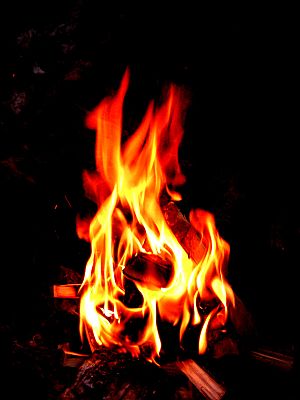 A pile of logs undergoing combustion.

Combustion (or burning) is a chemical process in which fuel reacts with an oxidant to produce heat. The release of heat can produce light in the form of flame.

A car engine and a rocket engine both work by combustion. Combustion in a car motor is different from combustion in a rocket engine. Car combustion is gas catching on fire and exploding in cylinders again and again to push them up and down, making the car move. Rocket combustion is made by rocket fuel exploding out of the back of the rocket moving it up. The burning of most substances is bad for the environment and the ozone layer because it can let off greenhouse gases such as Carbon dioxide. Hydrogen burns cleanly and gives off a lot of heat, but it does not produce much power, and is hard to find.

All content from Kiddle encyclopedia articles (including the article images and facts) can be freely used under Attribution-ShareAlike license, unless stated otherwise. Cite this article:
Combustion Facts for Kids. Kiddle Encyclopedia.