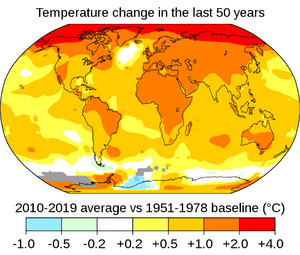 Climate change means the difference in the Earth's global climate or in regional climates over time. Climate change is now a major concern especially in colder countries. Climate change can be warmer or colder. This includes global warming and global cooling.

It describes changes in the state of the atmosphere over time scales ranging from decades to millions of years. These changes can be caused by processes inside the Earth, forces from outside (e.g. variations in sunlight intensity) or, more recently, human activities. Ice ages are prominent examples.

Climate change is any significant long-term change in the weather of a region (or the whole Earth) over a significant period of time. Climate change is about abnormal variations to the climate, and the effects of these variations. Examples include the melting of ice caps at the South Pole and North Pole. These changes may take tens, hundreds or perhaps millions of years.

Temperature rises can be caused climate cycles which can last for years (such as the El Niño–Southern Oscillation) to decades or centuries. Other changes are caused by an imbalance of energy that is "external" to the climate system, but not always external to the Earth. Examples of external forcings include changes in the composition of the atmosphere (e.g. increased concentrations of greenhouse gases), solar luminosity, Volcanic eruptions, and variations in the Earth's orbit around the Sun.

Some people have suggested trying to keep Earth’s temperature increase below 2 °C (3.6 °F). 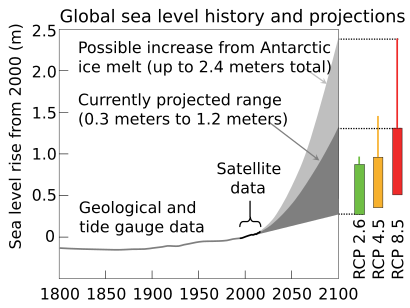 Historical sea level reconstruction and projections up to 2100 published in January 2017 by the U.S. Global Change Research Program

The environmental effects of climate change are broad and far-reaching, effecting oceans, ice, and weather. Changes may occur gradually or rapidly. Evidence for these effects comes from studying climate change in the past, from modelling, and from modern observations.

Since the 1950s, droughts and heat waves have appeared simultaneously with increasing frequency. Extremely wet or dry events within the monsoon period have increased in India and East Asia.

Climate change has led to decades of shrinking and thinning of the Arctic sea ice.

Global sea level is rising as a consequence of glacial melt, melt of the ice sheets in Greenland and Antarctica, and thermal expansion.

Higher atmospheric CO2 concentrations have also led to changes in ocean chemistry. An increase in dissolved CO2 is causing ocean acidification, harming corals and shellfish in particular. In addition, oxygen levels are decreasing as oxygen is less soluble in warmer water, with hypoxic dead zones expanding as a result of algal blooms stimulated by higher temperatures, higher CO2 levels, ocean deoxygenation, and eutrophication.

The greater the amount of global warming, the greater the risk of passing through ‘tipping points’, thresholds beyond which certain impacts can no longer be avoided even if temperatures are reduced.

An example is the collapse of West Antarctic and Greenland ice sheets, where a certain temperature rise commits an ice sheet to melt. 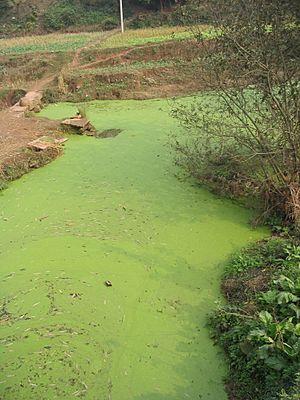 Algal blooms can present problems for ecosystems and human society

Recent warming has driven many terrestrial and freshwater species poleward and towards higher altitudes. Higher atmospheric CO2 levels and an extended growing season have resulted in global greening, whereas heatwaves and drought have reduced ecosystem productivity in some regions.

The oceans have heated more slowly than the land, but plants and animals in the ocean have migrated towards the colder poles as fast as or faster than species on land. Just as on land, heat waves in the ocean occur more frequently due to climate change, with harmful effects found on a wide range of organisms such as corals, kelp, and seabirds.

Ocean acidification threatens damage to coral reefs, fisheries, protected species, and other natural resources of value to society. Harmful algae bloom enhanced by climate change and eutrophication cause anoxia, disruption of food webs and massive large-scale mortality of marine life. Coastal ecosystems are under particular stress, with almost half of wetlands having disappeared as a consequence of climate change and other human impacts.

Boy looks at the burnt trees on his property after the South Australian bushfires in 2019. Australia's climate has been trending toward more bushfire weather over the last 30 years. The Climate Commission found that "The intensity and seasonality of large bushfires in south-east Australia appears to be changing, with climate change a possible contributing factor."

The effects of climate change on humans, mostly due to warming and shifts in precipitation, have been detected worldwide. The Arctic, Africa, small islands, and Asian megadeltas are likely to be especially affected by future climate change.

The World Health Organization (WHO) has estimated that between 2030 and 2050, climate change is expected to cause approximately 250,000 additional deaths per year, from malnutrition, malaria, diarrhea and heat stress.

The human impacts include both the direct effects of extreme weather, leading to injury and loss of life, as well as indirect effects, such as undernutrition brought on by crop failures.

Various infectious diseases are more easily transmitted in a warmer climate, such as dengue fever, which affects children most severely, and malaria. Young children are the most vulnerable to food shortages, and together with older people, to extreme heat. The WHO has classified human health impacts from climate change as the greatest threat to global health in the 21st century.

Climate change is affecting food security and has caused a reduction in global mean yields of maize, wheat, and soybeans between 1981 and 2010.

Regions dependent on glacier water, regions that are already dry, and small islands are also at increased risk of water stress due to climate change.

Economic damage as a consequence of climate change may be severe. The World Bank estimates that climate change could drive over 120 million people into poverty by 2030.

Current inequalities between men and women, between rich and poor, and between different ethnicities have been observed to worsen as a consequence of climate variability and climate change.

Low-lying islands and coastal communities are threatened through hazards posed by sea level rise, such as flooding and permanent submergence. Up to 1 billion people could be displaced due to climate change by 2050, with 200 million being the most repeated prediction.

All content from Kiddle encyclopedia articles (including the article images and facts) can be freely used under Attribution-ShareAlike license, unless stated otherwise. Cite this article:
Climate change Facts for Kids. Kiddle Encyclopedia.