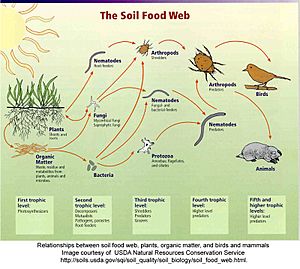 An illustration of a soil food web.

A food web is similar to a food chain but larger,and it is a diagram that combines many food chains into one picture.

Food webs show how plants and animals are connected in many ways to help them all survive, unlike food chains that just follow one path.

For example, a tree produces acorns - this is called the producer. Mice, squirrels, and insects eat these acorns and because there are many mice, the weasels, snakes and raccoons have food. With insects in the acorns, other predators would be attracted (like skunks or opossums) and therefore, foxes, hawks or owls could all find food. Food webs can be effected in many ways considering the urban areas of major countries are taking no action and care. It uses arrows to show the energy relationships among organisms

All content from Kiddle encyclopedia articles (including the article images and facts) can be freely used under Attribution-ShareAlike license, unless stated otherwise. Cite this article:
Food web Facts for Kids. Kiddle Encyclopedia.