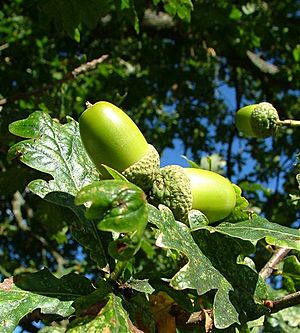 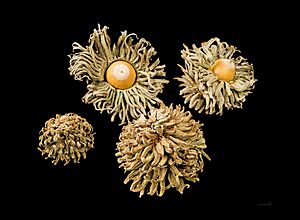 The acorn is the fruit of oaks. It is a nut, containing a single seed (rarely two seeds), enclosed in a tough, leathery shell, and borne in a cup-shaped cupule. Acorns vary from 1-6 cm long and 0.8-4 cm broad.

Acorns take about 6 or 24 months (depending on the species) to mature. 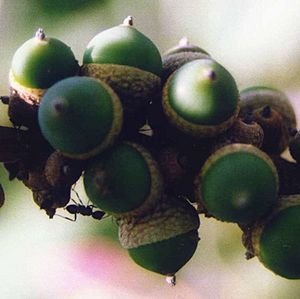 Acorns are one of the most important wildlife foods in areas where oaks occur. Creatures that make acorns an important part of their diet include birds such as jays, pigeons, some ducks and several species of woodpeckers.

Small mammals that feed on acorns include mice, squirrels and several other rodents. Large mammals such as pigs, bears and deer also consume large amounts of acorns; they may constitute up to 25% of the diet of deer in the autumn.

In some of the large oak forests in southwest Europe, pigs are still turned loose in oak groves in the autumn, to fill and fatten themselves on acorns. However, acorns are toxic to some other animals, such as horses. 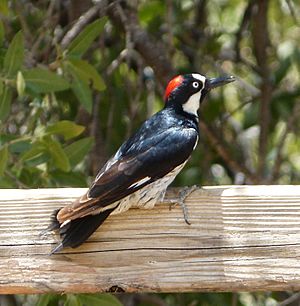 In some human cultures, acorns were once a dietary staple, though they are now generally only a very minor food.

The larvae of some moths and weevils also live in young acorns, consuming the kernels as they develop.

Acorns are also rich in nutrients. Percentages vary from species to species, but all acorns contain large amounts of protein, carbohydrates and fats, as well as the minerals calcium, phosphorus and potassium, and the vitamin niacin. Total food energy in an acorn also varies by species, but all compare well with other wild foods and with other nuts. Acorns also contain bitter tannins, the amount varying with the species.

Creatures that store acorns, such as jays and squirrels, may wait to consume some of these acorns until sufficient groundwater has percolated through them to leach the tannin's out. Other animals buffer their acorn diet with other foods. 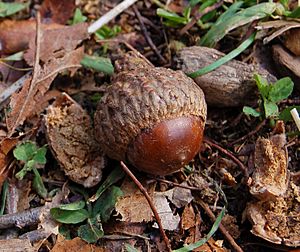 Many insects, birds and mammals metabolize tannin's with fewer ill-effects than humans. Several humans cultures devised acorn-leaching methods that involved tools, and that could be passed on to their children.

Species of acorn that contain large amounts of tannins are very bitter, astringent, and potentially irritating if eaten raw. This is particularly true of the acorns of red oaks. The acorns of white oaks, being much lower in tannin's, are nutty in flavour, which is enhanced if the acorns are given a light roast before grinding. Tannin's can be removed by boiling chopped acorns in several changes of water, until water no longer turns brown.

Being rich in fat, acorn flour can spoil or get mouldy easily and must be carefully stored. Acorns are also sometimes prepared as a massage oil. 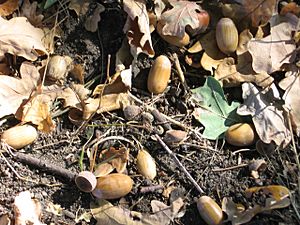 Acorns on the ground

Acorns, being too heavy to blow in wind, do not fall far from the tree at maturity. Because of this, oaks depend on seed dispersal agents to move the acorns beyond the canopy of the mother tree and into an environment in which they can germinate and find access to adequate water, sunlight and soil nutrients, ideally a minimum of 20-30 m from the parent tree.

Many acorn predators eat unripe acorns on the tree or ripe acorns from the ground, with no reproductive benefit to the oak. However, some acorn predators also serve as seed dispersal agents. Jays and squirrels that scatter-hoard acorns in caches for future use, effectively plant acorns in a variety of locations in which it is possible for them to germinate and thrive. 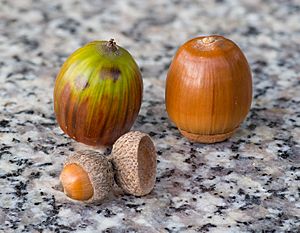 Although jays and squirrels retain remarkably large mental maps of cache locations and return to consume them, the odd acorn may be lost, or a jay or squirrel may die before consuming all of its stores. A small number of acorns manage to germinate and survive, producing the next generation of oaks.

Acorns germinate on different schedules, depending on their place in the oak family. Once acorns sprout, they are less nutritious, as the seed tissue converts to the indigestible lignins that form the root. 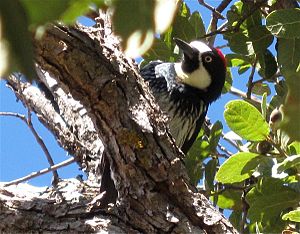 Acorns appear only on adult trees, and thus are often a symbol of patience and the fruition of long, hard labour. For example, an English proverb states that Great oaks from little acorns grow, urging the listener to wait for maturation of a project or idea.

The Norse legend that Thor sheltered from a thunderstorm under an oak tree has led to the belief that having an acorn on a windowsill will prevent a house from being struck by lightning, hence the popularity of window blinds decorated as acorns. 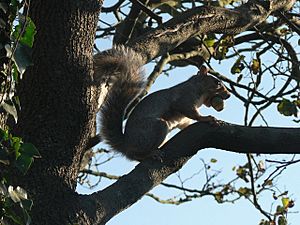 Acorn in a squirrels mouth

In ancient Japan, (Jomon period), the acorn was an important food. They harvested, peeled and soaked acorns in natural or artificial ponds for several days to remove tannin's, then processed it to make acorn cakes. 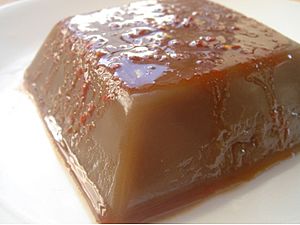 In Korea, an edible jelly named dotorimuk is made from acorns.

In the 1600s, a juice extracted from acorns was administered to habitual drunkards to cure them of their condition or else to give them the strength to resist another bout of drinking. Young lovers may place two acorns, representing themselves and the object of their affection, in a bowl of water in order to predict whether they have a future together; if the acorns drift towards each other they are certain to marry. 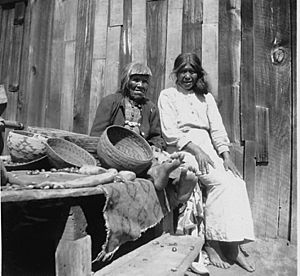 Acorns were a traditional food of many indigenous peoples of North America, but served an especially important role in California, where the ranges of several species of oaks overlap, increasing the reliability of the resource. 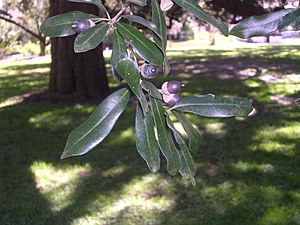 Leaves and acorns from a southern live oak

Acorns, unlike many other plant foods, do not need to be eaten or processed immediately, but may be stored for long time periods. In years that oaks produced many acorns, Native Americans sometimes collected enough acorns to store for two years as insurance against poor acorn production years. 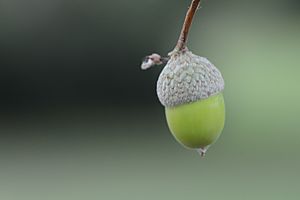 After drying them in the sun to discourage mould and germination, Indian women took acorns back to their villages and cached them in hollow trees or structures on poles, to keep acorns safe from mice and squirrels. These acorns could be used as needed. Storage of acorns permitted Native American women to process acorns when convenient, particularly during winter months when other resources were scarce.

Women shelled and pulverized those acorns that germinated in the fall before those that germinate in spring. Because of their high fat content, stored acorns can become rancid. Moulds may also grow on them.

Native North Americans took an active and sophisticated role in management of acorn resources through the use of fire, which increased the production of acorns and made them easier to collect.

All content from Kiddle encyclopedia articles (including the article images and facts) can be freely used under Attribution-ShareAlike license, unless stated otherwise. Cite this article:
Acorn Facts for Kids. Kiddle Encyclopedia.