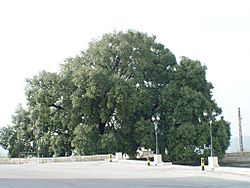 The oak tree is a tree or shrub in the genus Quercus. There are about 600 living species. The common name "oak" may also appear in the names of species in related genera, such as Lithocarpus.

The genus Quercus is native to the Northern Hemisphere. It includes deciduous and evergreen species from cool temperate to tropical latitudes in Asia and the Americas. North America has the largest number of oak species: about 90 occur in the United States. Mexico has 160 species, of which 109 are endemic. The second greatest center of oak diversity is China, which has about 100 species.

Oaks have spirally arranged leaves, with rounded edges in many species; some have leaves with jagged edges or entire leaves with smooth margins. Many deciduous species do not drop dead leaves until spring. In spring, a single oak tree produces both male flowers (as catkins) and small female flowers. The fruit is a nut called an acorn, carried in a cup-like structure. Each acorn has one seed (rarely two or three) and takes 6–18 months to mature, depending on species. The so-called "live oaks" are evergreen. They are not a taxonomic group, just a life style which occurs across the genus.

The oak is a kind of hardwood forest tree. They are well-known for being a climax vegetation in the temperate zone of the northern hemisphere. What that means is, left untouched by humans, it would be the dominant tree. Much of England was covered by oak forests before modern farming took over the land. The last extensive oak woodlands were cut down to build ships for the Royal Navy in the 18th century.

Some kinds of oak wood are very hard. A lot of furniture was made from oak wood, but the wood is now scarce and expensive. Much cheaper are softwoods like pine.

A mature oak tree stands about 100 feet tall (~30 metres). It is a home for more animals than any other European tree. 30 species of birds, 45 different bugs and over 200 species of moth have been found on oaks. Beetles burrow under the bark, and some drill holes into the wood. The leaves are eaten by many caterpillars. Many leaves carry strange little bumps on the underside. These are insect galls, caused by many little animals. Midges, moths, worms and tiny wasps lay their eggs in leaves or leaf buds. The leaf reacts by forming a growth around the eggs. Inside the gall, larvae develop. The leaf falls, but the larvae may come out only the next spring. Small galls only have one larva, but larger galls may contain as many as 30 larvae.

Oak trees produce acorns once a year which ripen in autumn. Oak trees may start producing acorns when they are about 20 years old. A mature oak may produce 90,000 acorns a year; this is several millions in its lifetime. 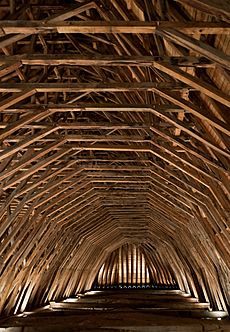 Heart of oak beams of the frame of the Église Saint-Girons in Monein, France

Oak wood has a density of about 0.75 g/cm3 (0.43 oz/cu in) creating great strength and hardness. The wood is very resistant to insect and fungal attack because of its high tannin content. It also has very appealing grain markings, particularly when quartersawn. Oak planking was common on high status Viking longships in the 9th and 10th centuries. The wood was hewn from green logs, by axe and wedge, to produce radial planks, similar to quarter-sawn timber. Wide, quarter-sawn boards of oak have been prized since the Middle Ages for use in interior panelling of prestigious buildings such as the debating chamber of the House of Commons in London and in the construction of fine furniture. Oak wood, from Quercus robur and Quercus petraea, was used in Europe for the construction of ships, especially naval men of war, until the 19th century, and was the principal timber used in the construction of European timber-framed buildings. Today oak wood is still commonly used for furniture making and flooring, timber frame buildings, and veneer production.

Barrels in which wines, sherry, and spirits such as brandy, Irish whiskey, Scotch whisky and Bourbon whiskey are aged are made from European and American oak, with single barrel whiskey fetching a premium. The use of oak in wine can add many different dimensions to wine based on the type and style of the oak. Oak barrels, which may be charred before use, contribute to the colour, taste, and aroma of the contents, imparting a desirable oaky vanillin flavour to these drinks. The great dilemma for wine producers is to choose between French and American oakwoods. French oaks (Quercus robur, Q. petraea) give the wine greater refinement and are chosen for the best wines since they increase the price compared to those aged in American oak wood. American oak contributes greater texture and resistance to ageing, but produces more powerful wine bouquets. Oak wood chips are used for smoking fish, meat, cheeses, and other foods. 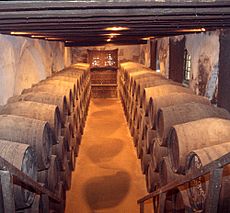 Japanese oak is used in the making of professional drums from the manufacturer Yamaha Drums. The higher density of oak gives the drum a brighter and louder tone compared to traditional drum materials such as maple and birch. In hill states of India, besides fuelwood and timber, the local people use oak wood for making agricultural implements. The leaves are used as fodder during lean period and bedding for livestock. 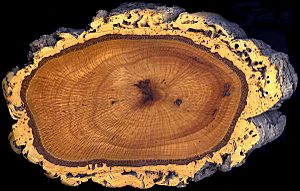 A cross section of the trunk of a cork oak, Quercus suber

The bark of the cork oak is used to produce wine stoppers (corks). This species grows in the Mediterranean Sea region, with Portugal, Spain, Algeria, and Morocco producing most of the world's supply.

Of the North American oaks, the northern red oak is one of the most prized of the red oak group for lumber, much of which is marketed as red oak regardless of the species of origin. It is not good for outdoor use due to its open capillaries unless the wood is treated. If the wood is properly treated with preservatives, it will not rot as quickly as cured white oak heartwood. The closed cell structure of white oaks prevents them from absorbing preservatives. With northern red oak, one can blow air through an end grain piece 10 inches long to make bubbles come out in a glass of water. These openings give fungus easy access when the finish deteriorates. Shumard oak, a member of the red oak subgenus, provides timber which is described as "mechanically superior" to northern red oak. Cherrybark oak is another type of red oak which provides excellent timber.

The standard for the lumber of the white oak group – all of which is marketed as white oak – is the Quercus alba. White oak is often used to make wine barrels. The wood of the deciduous pedunculate oak and sessile oak accounts for most of the European oak production, but evergreen species, such as Holm oak and cork oak also produce valuable timber.

The bark of the white oak is dried and used in medical preparations. Oak bark is also rich in tannin, and is used by tanners for tanning leather. Acorns are used for making flour or roasted for acorn coffee. 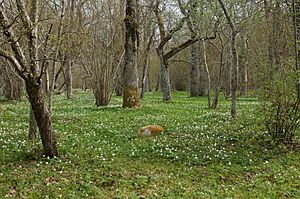 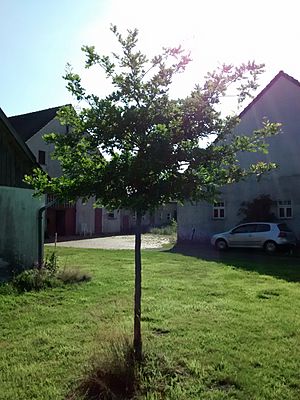 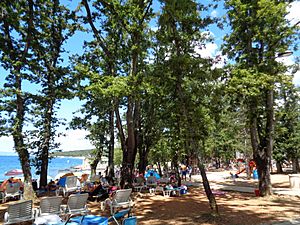 Oak forest on the beach in Njivice, Croatia

Oak galls were used for centuries as a main ingredient in iron gall ink, a kind of manuscript ink, harvested at a specific time of year. In Korea, oak bark is used to make shingles for traditional roof construction.

All content from Kiddle encyclopedia articles (including the article images and facts) can be freely used under Attribution-ShareAlike license, unless stated otherwise. Cite this article:
Oak Facts for Kids. Kiddle Encyclopedia.