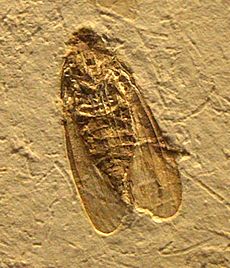 True bugs are an order of insects. Biologists call true bugs the Hemiptera. There are around 80,000 species of true bugs. The word bug by itself can have other meanings.

The name "Hemiptera" is from the Greek: it means hemi (half) and pteron (wing). Most true bugs have half of their front wings hardened and have the other half soft. These wings are called hemelytra (singular hemelytron), because they halfway look like the hard wings (elytra) of beetles. The hind wings are totally soft and are shorter than the front wings.

There are many different kinds of true bugs, some of which are aphids, cicadas, planthoppers, shield bugs, and others. All of these are true bugs. Their size is from 1 mm to over 10 cm. All true bugs have similar mouthparts, which they use to suck up plant sap. 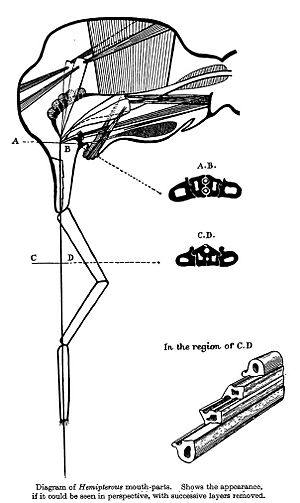 Hemipteran mouthparts are distinctive, with mandibles and maxillae modified to form a piercing "stylet" sheathed within a modified labium.

The defining feature of hemipterans is their "beak". The stylet is capable of piercing tissues and sucking liquids. The stylet contains a channel for the outward movement of saliva and another for the inward movement of liquid food. The beak is usually folded under the body when not in use.

The diet is typically plant sap, but some hemipterans such as assassin bugs are blood-suckers, and a few are predators.

The forewings of Hemiptera are either entirely membranous or partially hardened.

The antennae in Hemiptera typically consist of four or five segments, although they can still be quite long, and the tarsi of the legs have two or three segments. 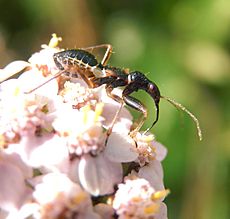 Hemipterans are hemimetabolous, meaning that they do not undergo metamorphosis, the complete change of form between a larval phase and an adult phase. Instead, their young are called nymphs, and resemble the adults. The nymphs moult several times as they grow, and each instar resembles the adult more than the previous one. Wing buds grow in later stage nymphs and the final transformation involving little more than the development of functional wings (if they are present at all) and functioning sexual organs, with no intervening pupal stage as in holometabolous insects. 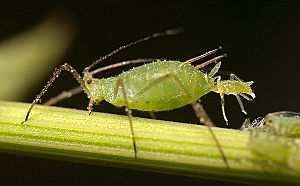 Many aphids are parthenogenetic during part of the life cycle, such that females can produce unfertilized eggs, which are clones of their mother. All such young are female (thelytoky), so 100% of the population at these times can produce more offspring. Many species of aphid are also viviparous: the young are born live rather than laid as eggs. These adaptations enable aphids to reproduce extremely rapidly when conditions are suitable.

Most hemipterans use their sucking and piercing mouthparts to feed on plant sap. These include cicadas, leafhoppers, treehoppers, planthoppers, froghoppers, aphids, whiteflies, scale insects, and some other groups. Some feed on many species of plant. Some sap-suckers move from one host to another at different times of year.

Phloem sap is a sugary liquid low in amino acids, and insects have to process large quantities in order to meet their nutritional requirements for growth. 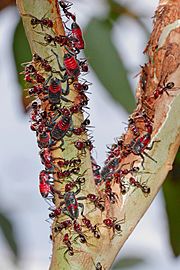 Some species of ant protect and farm aphids (Sternorrhyncha) and other sap-sucking hemipterans, gathering and eating the honeydew that these hemipterans secrete. The relationship is symbiotic, as both ant and aphid benefit.

Some leafhoppers (Auchenorrhyncha) are similarly "milked" by ants. In the Corcovado rain forest of Costa Rica, wasps compete with ants to protect and milk leafhoppers; the leafhoppers preferentially gave more honeydew, more often, to the wasps, which were larger and may have offered better protection. 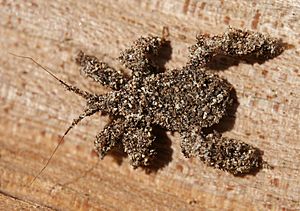 Most other hemipterans are predatory, feeding on other insects, or even small vertebrates. The predatory shield bug for example stabs caterpillars with its beak and sucks out the body fluids. The nymph of Reduvius personatus, the masked hunter bug, camouflages itself with layers of particles on its body; it can give a painful bite.

A few hemipterans are parasitic, feeding on the blood of larger animals. These include bedbugs and the triatomine kissing bugs of the assassin bug family Reduviidae, which can transmit the dangerous Chagas disease. 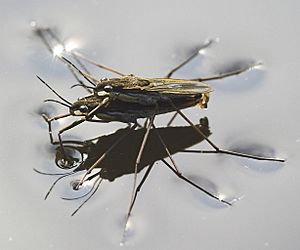 Several families of Hemiptera are water bugs, adapted to an aquatic lifestyle, such as the water boatmen and water scorpions. They are mostly predatory, and have legs adapted as paddles to help the animal move through the water. The "pondskaters" or "water striders" of the family Gerridae are also associated with water, but use the surface tension of standing water to keep them above the surface; they include the sea skaters in the genus Halobates, the only truly marine group of insects. 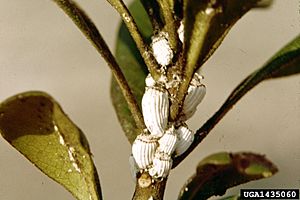 Colony of cottony cushion scale, a pest of citrus fruits 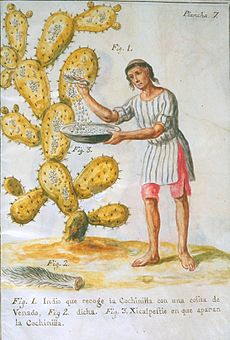 Other hemipterans have positive uses for humans, such as in the production of the dyestuffs cochineal and carmine. The scale insect Dactylopius coccus produces the brilliant red-coloured carminic acid to deter predators. Up to 100,000 scale insects need to be collected and processed to make a kilogram (2.2 lbs) of cochineal dye. A similar number of lac bugs are needed to make a kilogram of shellac, a brush-on colourant and wood finish. Additional uses of this traditional product include the waxing of citrus fruits to extend their shelf-life, and the coating of pills to moisture-proof them, provide slow-release or mask the taste of bitter ingredients.

As human parasites and disease vectors 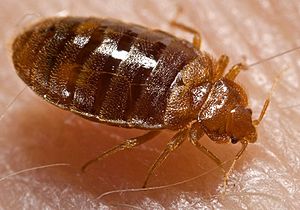 Chagas disease is a modern day tropical disease caused by Trypanosoma cruzi and transmitted by kissing bugs, so-called because they suck human blood from around the lips while a person sleeps.

The bed bug is an external parasite of humans. It lives in bedding and is mainly active at night, feeding on human blood, generally without being noticed. 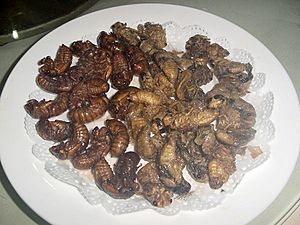 Some large cicadas are used as food in Asian countries such as China, and they are much esteemed in Malawi and other African countries. Insects have a high protein content and good food conversion ratios, but most hemipterans are too small to be a useful component of the human diet.

Cicadas have featured in literature since the time of Homer's Iliad, and as motifs in decorative art from the Chinese Shang dynasty (1766-1122 B.C.). They are described by Aristotle in his History of Animals and by Pliny the Elder in his Natural History; their mechanism of sound production is mentioned by Hesiod in his poem Works and Days "when the Skolymus flowers, and the tuneful Tettix sitting on his tree in the weary summer season pours forth from under his wings his shrill song".

In mythology and folklore

Among the bugs, cicadas in particular have been used as money, in folk medicine, to forecast the weather, to provide song (in China), and in folklore and myths around the world.

All content from Kiddle encyclopedia articles (including the article images and facts) can be freely used under Attribution-ShareAlike license, unless stated otherwise. Cite this article:
Hemiptera Facts for Kids. Kiddle Encyclopedia.