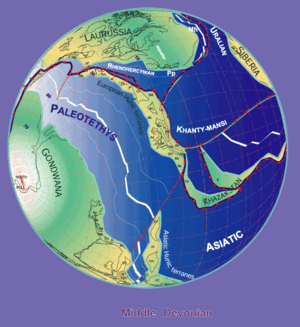 The Paleo-Tethys Ocean opened during the Devonian

The Devonian is the fourth period of the Paleozoic era and the Phanerozoic eon. It lasted from about 419 million years ago (mya) to about 359 mya. It is named after Devonshire, England, where rocks from this period were first studied.

Sea levels were high, and there was a great variety of fish and other marine organisms. The Devonian fish included the Agnatha (jawless fish), the Acanthodii (spiny fish), the Placoderms (armoured fish), the Chondrichthyes (cartilaginous fish), and the early Osteichthyes (bony fish). The Devonian strata are divided into lower, middle and upper subdivisions.

By the late Devonian, the land had been colonized by plants and insects. In the oceans, massive reefs were built. Euramerica and Gondwana were beginning to converge into what would become Pangaea.

Tectonic and volcanic activity was high. A series of extinction events occurred towards the end of the Devonian, including a major event at the Frasnian-Famennian boundary in the Late Devonian, about 364 mya.

All content from Kiddle encyclopedia articles (including the article images and facts) can be freely used under Attribution-ShareAlike license, unless stated otherwise. Cite this article:
Devonian Facts for Kids. Kiddle Encyclopedia.