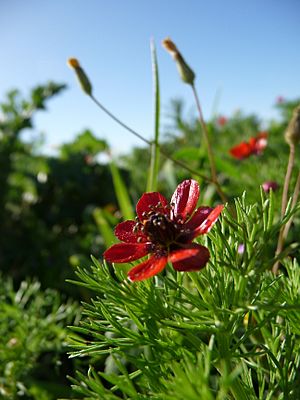 Seed plants are a group of plants. Gymnosperms and angiosperms form the group. Their seeds have three parts: (1) an embryo, (2) a supply of nutrients for the embryo, and (3) a seed coat. They are also called spermatophytes or phanerogams. The seed plants dominate almost all the environments on land.

The fossil seed ferns (Pteridospermatophyta) were one of the earliest successful groups of land plants, and forests dominated by seed ferns were prevalent in the Permian. Glossopteris was the most prominent tree genus in the ancient southern supercontinent of Gondwana during the Permian period. By the Triassic period, seed ferns had declined, (perhaps were extinct) and modern gymnosperm groups were abundant and dominant to the Upper Cretaceous, when angiosperms radiated.

All content from Kiddle encyclopedia articles (including the article images and facts) can be freely used under Attribution-ShareAlike license, unless stated otherwise. Cite this article:
Seed plants Facts for Kids. Kiddle Encyclopedia.