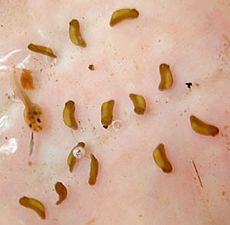 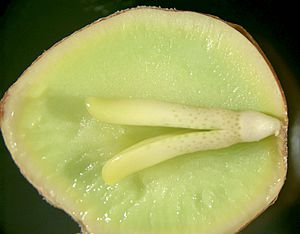 Inside a Ginkgo seed is an embryo, with the beginnings of leaves and a stem.

An embryo is the earliest stage in the development of a fertilised egg (the zygote). It is the term used for any animal or plant, from the first cell division until birth, or hatching, or germination in plants.

In humans, it is called an embryo until about eight weeks after fertilization, and from then until birth it is called a foetus (US: fetus).

In organisms that reproduce sexually, once a sperm fertilizes an egg cell, the result is a cell called the zygote, which has DNA from each of the two parents. In plants, animals, and some protists, the zygote divides by mitosis to produce an embryo.

All content from Kiddle encyclopedia articles (including the article images and facts) can be freely used under Attribution-ShareAlike license, unless stated otherwise. Cite this article:
Embryo Facts for Kids. Kiddle Encyclopedia.