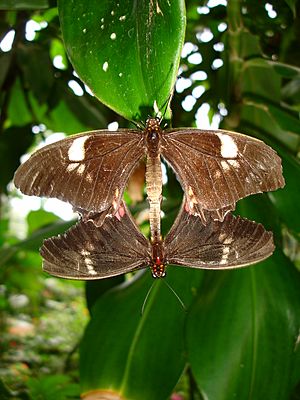 Butterflies are among those animals that reproduce sexually 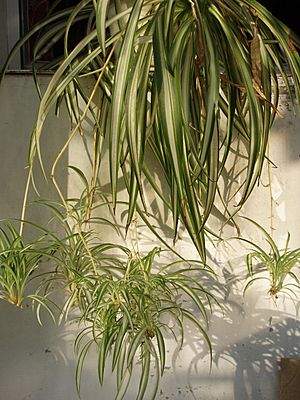 Spider plants with small stolons. They are a way of asexual reproduction

Sex is a type of reproduction common among living things. Sex is used by plants and animals, and also by fungi and various single-celled organisms. It usually needs two individuals which are different sexes from the same species. It works by combining genes from more than one source.

Organisms may have more than one kind of reproduction:

A person's sex is either male or female. For example: John's sex is male. Jane's sex is female. This difference is sometimes called gender.

There are occasional exceptions to this rule: the process of meiosis which makes the sex cells can go wrong. This results in an individual having 3 X chromosomes, or 2 Y chromosomes or XXY instead of XY.

Sexual reproduction first appeared about a billion years ago. It evolved within single-celled eukaryotes. The scientific community still discusses why it appeared, and why it still exists. Reasons commonly given include:

Sexual reproduction is a process that can only be found in eukaryotes. These cells have a nucleus and mitochondria. There are other kinds of organisms (other than animals, plants and fungi), the other eukaryotes – such as the malaria parasite – that also engage in sexual reproduction. Some bacteria use conjugation to transfer genetic material between bacteria. This is not the same as sexual reproduction, but it also results in the mixture of genetic traits.

In sexual reproduction the cells used for reproduction, called gametes, are either eggs or sperms. Fertilisation needs two different such cells. The mechanism of cell division only works when one sperm alone enters the egg. Once it is in, a fast reaction goes through the egg cell wall to shut off all other sperm.

Sex determination in biology is about the function of sex, not what individuals look like. In humans, males and females usually look different. In many species they do not, except for the sex organs. Sex can be determined in different ways:

When there is sex determination there are basically two cases:

Like humans and other mammals, the common fruit fly has an XY sex determination system.

Usually, sex is determined by an organism's genes. With genetic sex determination, most alleles or genes that influence sexual development are on the same chromosome. That chromosome is then called the sex chromosome. Because genetic sex determination is controlled by a pair of sex chromosomes (or by the presence or absence of one of the chromosomes), there are usually the same number of male and female offspring. In humans, for instance, sperms carry either an X or a Y chromosome, and they occur in roughly equal numbers. 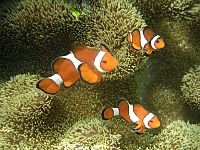 Clownfish are initially male; the largest fish in a group becomes female.

For some species sex is not determined by inheritance, but instead by environmental factors experienced during development or later in life. Many reptiles have temperature-dependent sex determination: the temperature embryos experience during their development determines the sex of the organism. In some turtles, for example, males are produced at lower incubation temperatures than females; this difference in critical temperatures can be as little as 1-2 °C.

Some fish change sex over the course of their life. This phenomenon is called sequential hermaphroditism. In clownfish, smaller fish are male, and the dominant and largest fish in a group becomes female. In many wrasse the opposite is true—most fish are female at birth and become male when they reach a certain size. Sequential hermaphrodites may produce both types of gametes over the course of their lifetime, but at any given point they are either female or male.

In some ferns the default sex is hermaphrodite. Ferns which grow in soil which has previously supported hermaphrodites are influenced by hormones remaining to develop as male.

All content from Kiddle encyclopedia articles (including the article images and facts) can be freely used under Attribution-ShareAlike license, unless stated otherwise. Cite this article:
Sex Facts for Kids. Kiddle Encyclopedia.