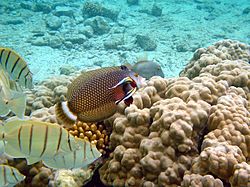 The wrasses are a family, the Labridae, of marine fish, many of which are brightly coloured. The family is large and diverse, with over 600 species in 82 genera.

They are typically small fish, mostly less than 20 centimetres (7.9 in) long, although the largest, the Humphead wrasse, can measure up to 2.5 metres (8.2 ft).

They are efficient carnivores, feeding on a wide range of small invertebrates. Many smaller wrasses follow the feeding trails of larger fish, picking up invertebrates disturbed by their passing.

Many species can be recognized by their thick lips. The inside of these lips is curiously folded, which gave rise the German name of Lippfische. The dorsal fin has 8–21 spines and 6–21 soft rays, usually running most of the length of the back.

Wrasse are sexually dimorphic. Many species are capable of changing sex. Juveniles are a mix of males and females (known as Initial Phase or IP individuals) but the largest adults become territory-holding (Terminal Phase or TP) males.

The word "wrasse" comes via Cornish from the Welsh word gwrach meaning an old woman or hag.

All content from Kiddle encyclopedia articles (including the article images and facts) can be freely used under Attribution-ShareAlike license, unless stated otherwise. Cite this article:
Wrasse Facts for Kids. Kiddle Encyclopedia.