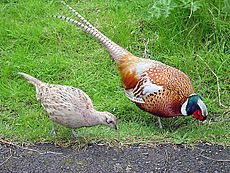 Female (left) and male Common Pheasant, illustrating the big difference in both colour and size. 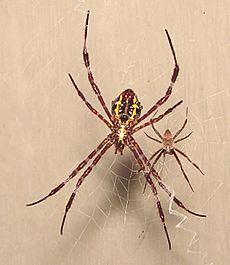 Female (left) and male Argiope appensa spiders: the male is much smaller than the female 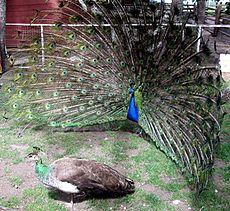 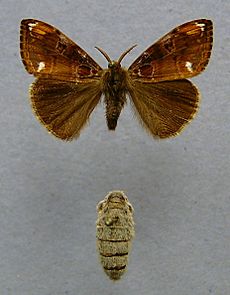 Butterfly Orygia recens: upper is the male; below is the female, which has no wings. Several species in the genus have this arrangement.

Sexual dimorphism is a concept in biology. It means that the male and the female of a species look noticeably different. The word comes from the Greek: di (two) and morphe (form).

It is the most common type of polymorphism. It may be the result of sexual selection, that is, competition between members of the same species for reproduction. More generally, sexual dimorphism is inherited, which means the differences between males and females have survival value.

The features that distinguish the two sexes of a species are called secondary sex characteristics. They are not directly part of the reproductive system. They are the product of sexual selection for traits which give an individual an advantage over its rivals in survival and reproduction.

The difference between sexes can include:

The main functions of sexual dimorphism are to improve the individual's chance of mating in various ways:

Some animals show these differences only during mating season. Deer shed their antlers and peacocks shed their tails out of season. This minimises the key disadvantage of sexual dimorphism, which is, it makes the male much easier to be seen by predators.

All content from Kiddle encyclopedia articles (including the article images and facts) can be freely used under Attribution-ShareAlike license, unless stated otherwise. Cite this article:
Sexual dimorphism Facts for Kids. Kiddle Encyclopedia.