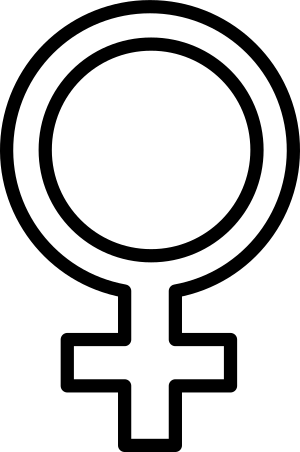 The symbol biologists use for female organisms

Female (symbol: ♀) is one of two genders. It is the sex that produces ova ("egg" cells) for sexual reproduction. Females of some species also bear offspring.

Organisms can either be grouped as male or female. Female humans are called women and their bodies are different from male humans (who are called men).

A woman has a vagina (a male has a penis) which is the main sexual organ. They also have breasts with milk glands, which allow them to nurse (feed) infants.

A woman's shoulders are usually not as wide as a man's, but women usually have wider hips than men, because they need wide hips to be able to give birth.

All content from Kiddle encyclopedia articles (including the article images and facts) can be freely used under Attribution-ShareAlike license, unless stated otherwise. Cite this article:
Female Facts for Kids. Kiddle Encyclopedia.