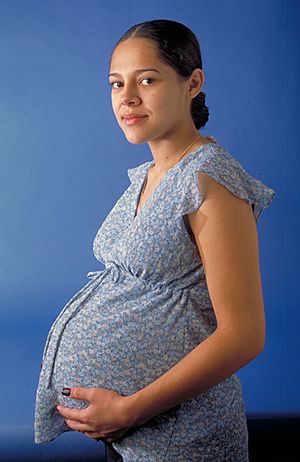 A woman is a female human adult. People use the word "woman" (one woman, two or more women) to talk about biological sex, however, people also use the term woman to identify a female human, regardless of age, as in phrases such as "Women's rights".

A woman usually has a uterus or womb. A baby develops in the uterus, a sexual organ exclusive to females.

While women have gained many more rights and freedoms in most of the developed world, especially since the beginning of the 20th century, women still face discrimination and harassment worldwide. Until then, women in most of the world did not have the right to vote, and were treated with even greater disrespect than today.

The symbol for the goddess Venus is used for women.

The Latin fēmina, whence female, is likely from the root in fellāre (to suck), in reference to breastfeeding.

In some prehistoric cultures, women often had the roles of gathering food and looking after children. In modern times, these roles have changed a lot, with single, career oriented women becoming a regular part of society.

All content from Kiddle encyclopedia articles (including the article images and facts) can be freely used under Attribution-ShareAlike license, unless stated otherwise. Cite this article:
Woman Facts for Kids. Kiddle Encyclopedia.