A karyotype is the number and appearance of chromosomes in the nucleus of a eukaryote cell. The term is also used of the complete set of chromosomes in a species, or an individual organism. It describes the number of chromosomes, and what they look like under a light microscope. Attention is paid to their length, the position of the centromeres, any differences between the sex chromosomes, and any other physical characteristics. The preparation and study of karyotypes is part of cytogenetics (cytology and genetics). 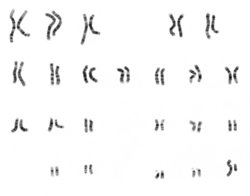 Karyogram of a human male.

The basic number of chromosomes in the somatic (body) cells of an individual or a species is called the somatic number and is designated 2n. Thus, in humans 2n = 46. In the sex cells the chromosome number is n (humans: n = 23).

The chromosomes are depicted (by rearranging a microphotograph) in a standard format known as a karyogram or idiogram: in pairs, ordered by size and position of centromere for chromosomes of the same size. This may be used for many purposes; such as, to show genetic disease, what sex the animal is and its diploid number. In humans, cytologists have used karyotypes to help identify genetic abnormalities a baby might have before it is born.

Karyotypes may be studied to gather information about past evolutionary events, such as polyploidy.

All content from Kiddle encyclopedia articles (including the article images and facts) can be freely used under Attribution-ShareAlike license, unless stated otherwise. Cite this article:
Karyotype Facts for Kids. Kiddle Encyclopedia.