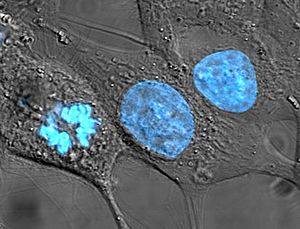 Cells in tissue culture stained for DNA with the blue Hoechst dye. The middle and right cells are in interphase, so their entire nuclei are labeled. On the left, a cell is going through mitosis and its DNA has condensed, ready for division 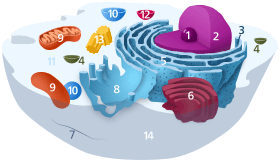 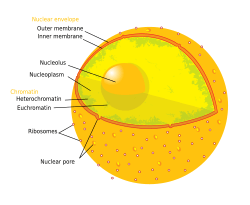 The eukaryotic cell nucleus. Seen here are the ribosome-dotted double membranes of the nuclear envelope, the DNA complex, and the nucleolus

A cell nucleus (plural: cell nuclei) is the part of the cell which contains the genetic code, the DNA. The nucleus is small and round, and it works as the cell's control center. It contains chromosomes which house the DNA. The human body contains billions of cells, most of which have a nucleus. All eukaryote organisms have nuclei in their cells, even the many eukaryotes that are single-celled. Bacteria and Archaea, which are prokaryotes, are single-celled organisms of quite a different type and do not have nuclei. Cell nuclei were first found by Antonie van Leeuwenhoek in the 17th century.

Inside the nucleus there are no membrane-bound sub-compartments. Its contents are not uniform, and a number of sub-nuclear bodies exist, made up of unique proteins, RNA molecules, and particular parts of the chromosomes. The best-known of these is the nucleolus, which is mainly involved in the assembly of ribosomes. After being produced in the nucleolus, ribosomes are exported to the cytoplasm where they translate mRNA into proteins.

When a cell is dividing or preparing to divide, the chromosomes become visible with a light microscope. At other times when the chromosomes are not visible, the nucleolus will be visible.

Within the nucleus is a structure called a nucleolus. It is made at a nucleolus organizer region (NOR), which is a chromosomal region around which the nucleolus forms. Inside the nucleolus ribosomes are made. These are exported through the nuclear pore complexes to the cytoplasm, where they are work to build proteins and sometimes become attached to the endoplasmic reticulum if they are making membrane proteins.

All content from Kiddle encyclopedia articles (including the article images and facts) can be freely used under Attribution-ShareAlike license, unless stated otherwise. Cite this article:
Cell nucleus Facts for Kids. Kiddle Encyclopedia.