Newts are small amphibians, a kind of salamander. They are found in North America, Europe, and North Asia.

Their mother lays eggs and leaves them. Tadpoles are born from those eggs.

Newts have three life stages. First as a tiny aquatic larva, which gradually undergoes metamorphosis. Then they leave the water for a year as a juvenile called an eft. They go back in the water to breed as adults.

In some species the adults stay in water for the rest of their lives. Others are land-based, but return to water each year to breed. 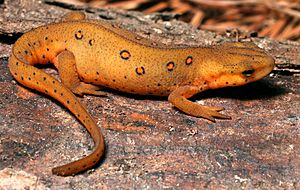 Many newts produce toxins in their skin secretions as a defence against predators. They have bright skin colours as a warning to other animals.

Taricha newts of western North America are particularly toxic; the rough-skinned newt Taricha granulosa of the Pacific Northwest produces more than enough tetrodotoxin to kill an adult human. Recently, a 29-year-old man in Coos Bay, Oregon, who had been drinking heavily, swallowed a rough-skin newt for a dare; he died later that day despite hospital treatment.

Most newts can be safely handled, provided that the toxins they produce are not ingested or allowed to come in contact with mucous membranes, or breaks in the skin. After handling, proper hand-washing techniques should be followed due to the risk from the toxins they produce and bacteria they carry, such as salmonella. It is illegal to handle or disturb great crested newts in the UK without a licence.

Are newts a related group?

The term "newt" has traditionally been used as a functional term for salamanders living in water, and not a systematic unit. The relationship between the genera has been uncertain, though they may be a natural systematic unit. Newer molecular analysis tend to suggest they actually do form a clade. Newts only appear in one subfamily of salamanders, the Pleurodelinae (of the family Salamandridae). Some genera occasionally listed as Pleurodelinae are not newts (Salamandrina and Euproctus).

All content from Kiddle encyclopedia articles (including the article images and facts) can be freely used under Attribution-ShareAlike license, unless stated otherwise. Cite this article:
Newt Facts for Kids. Kiddle Encyclopedia.